Resident looks for relief from sinkhole 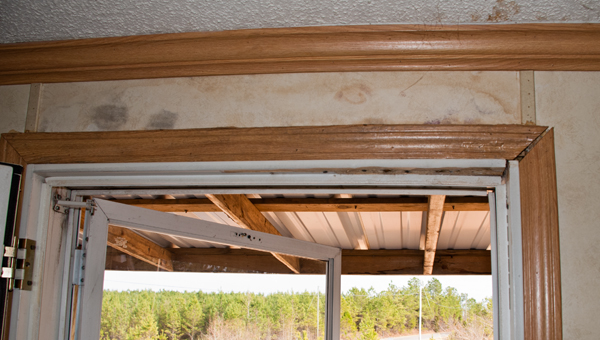 A sinkhole forming on property owned by Glenn Greer has caused door frames to shift.

Glenn Greer has a problem, and he’s not sure who to turn to for help.

A sinkhole appears to be forming on Greer’s property off County Road 54 in north Chilton County, causing damage to his trailer and making him wonder what can be done. 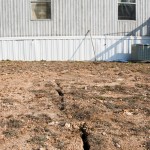 Greer first began noticing cracks in his back yard about two months ago. He thinks his only option is to move his trailer to another location.

“We put everything we had into this place,” Greer said about the home he has shared with his wife, Sharon, and daughter, Brei, for about two years.

Glenn Greer first began noticing cracks in his back yard, that now run 3 feet deep in some places, about 2 1/2 months ago, about the time doors at the home became difficult to close and other signs of shifting ground became evident.

“I had some stuff in a shop on wheels. I came out one day, and it was out in the middle of the shop,” Greer said.

Though a Chilton County resident, Greer receives water service from Wilton. It was discovered a water main was ruptured near Greer’s home.

Greer said he thinks the leaking water could have caused the sinkhole, though Wilton Town Clerk April Price said the broken line was likely the result of the sinkhole instead of the cause.

“A geologist came to look and make sure the water line wasn’t affected or caused it,” Price said. “Basically, what the geologist told us is that it appears to be a sinkhole of a natural nature.

“We’re trying to help him as much as we can. We’re limited to what we can do on personal property.”

Greer doesn’t disagree that the town has been helpful, but if they can’t do anything to alleviate his situation, he doesn’t know where to turn.

The family will likely have to purchase another piece of property to move their trailer onto because the sinkhole covers a good portion of their lot, but Greer doesn’t know if they can shoulder the financial burden.

“I’ve been out looking for property, trying to find a place to go,” he said.

Rasco Angus Farm LLC in Jemison has been recognized nationally by the American Angus Association for having two registered Angus... read more