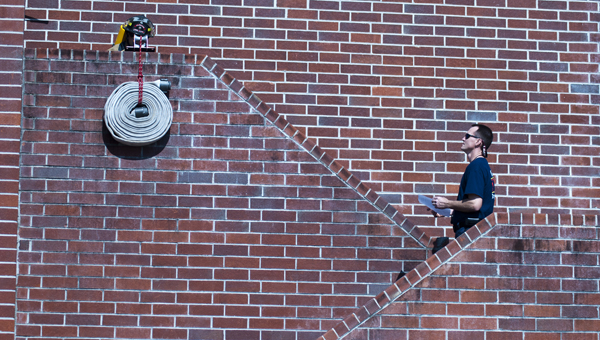 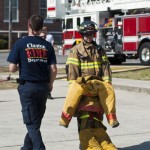 Nic Bolton, Zach Burke and Brian Dennis all went through CFD’s physical agility test to try and earn a spot on the staff.

The agility test is the third part of the hiring process for CFD. It follows a medical physical and a drug test.

“We do it whenever we do a new hire,” said Chief David Driver. “It simulates some things they would have to do in a fire.”

The test involves a walk to get blood flow stimulated, stacking two hoses on a fire truck, dragging a hose and spraying it, stacking a ladder, pulling another hose up a set of stairs, dragging a 120-pound dummy, and then a walk around the block near the fire station, all to be done in 10 minutes or less, all while wearing a fire suit and air pack that weighs a combined 75-100 pounds.

Despite the toughness of the test, Chief Driver said everyone who has taken it has passed.

“We’ve never had a failure,” he said.  “[The applicants] get two chances, in case they roll their ankle or something like that.”

The average time to finish the test is usually around 7 1/2 to 8 minutes. If the applicants pass, and their paperwork is approved, Driver plans to have them start March 1.