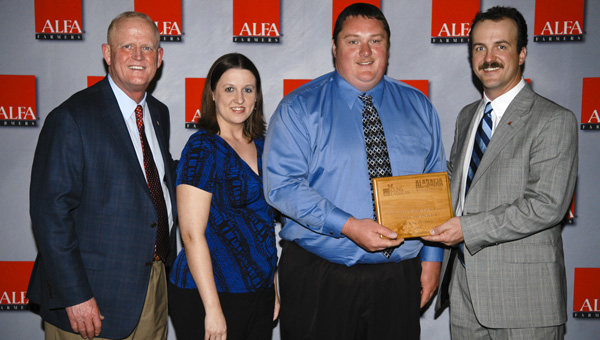 Among the commodity division winners, Chilton County’s Jason and Leslie Cleckler, wildlife, were recognized as one of the 12 Outstanding Young Farm Families (OYFF), as the Alabama Farmers Federation concluded its Young Farmers Leadership Conference Saturday, Feb. 19 in Huntsville.

The awards banquet was held in the shadow of a 426-foot-long Saturn V rocket, which is housed at the U.S. Space and Rocket Center’s Davidson Center for Space Exploration.

The keynote speaker for the Young Farmers Leadership Conference was Chad Hymas, a Utah rancher who was paralyzed in a farm accident at the age of 27. A decade later, Hymas is president of his own communications company and travels 150,000 miles a year sharing his motivational message.

More than 350 young farmers participated in the three-day conference, which included educational seminars and the OYFF contest. The OYFF program, now entering its 49th year, seeks to recognize young farm families and farmers between the ages of 18 and 35 who are doing an outstanding job in their farm, home and community activities and promoting a better understanding of agriculture with the urban populace.

Each commodity winner received a plaque and $200 cash award. From the commodity winners, six finalists were chosen to compete for the title of overall Outstanding Young Farm Family for 2011. The overall winner will be named at the Federation’s 90th Annual Meeting in Mobile, Dec. 4-6 and will receive a John Deere Gator, courtesy of Alabama Ag Credit and Alabama Farm Credit; the use of a new vehicle; and a computer package sponsored by Valcom/CCS Wireless.

Alabama Young Farmers Chairman Ben Haynes of Cullman County said Hymas and other presenters at the conference emphasized the importance of nurturing relationships both professionally and personally.

“A common theme among all our speakers and all of our events so far has been our relationships with those around us and how we can be not only better farmers and better producers, but also better managers and betters sons, fathers, daughters and wives as we interact with those around us,” Haynes said. “I hope we go back (to our farms) and have better farming skills, but we also have better people skills — not only people skills on our own farms as we deal with family members and employees, but also as we deal with the public in sharing our message.”

Haynes said the conference gave the participants a chance to network with other young farmers who share the same challenges and opportunities. It also provided motivation for the young farmers to carry on their families’ agricultural legacies.

Haynes, whose son Jack is the sixth generation on their family farm, said his parents attended their first Young Farmers Conference in Huntsville many years ago. Today, Haynes is following in their footsteps as he works to preserve the farming heritage for Jack.

“If there’s going to be a farm, not just for Jack, but for any of this next generation, it’s imperative that we do what we can do to protect it.”