Bill would allow PDs to give speeding tickets along interstates 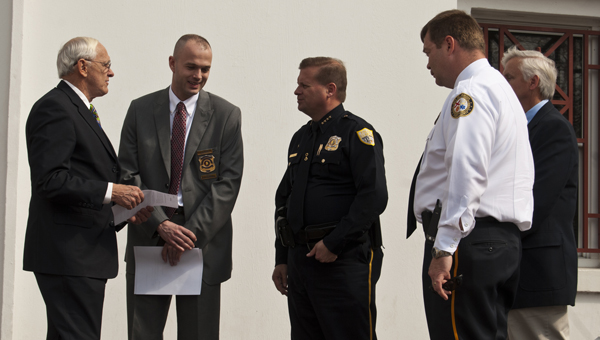 State lawmakers will consider a bill this upcoming session that would give police officers across the state the ability to give speeding tickets along interstates and within their police jurisdictions.

Current law prevents departments in cities with less than 19,000 residents from issuing speeding tickets along interstates. The law also permits officers to only enforce speeding limits within a municipality’s city limits, but not its police jurisdiction.

Police departments’ ability to issue speeding tickets was limited in 1996 in a measure supported by former State Sen. Lowell Barron (D-Fyffe). Barron pushed for restrictions after being stopped by officers twice between his home and Montgomery, including once in Clanton.

Officers can issue citations for any other traffic violations — reckless driving, DUIs … just not speeding.

State Sen. Gerald Dial (R-Lineville), along with officers from Clanton and Jemison, held a press conference Tuesday in Montgomery to announce a bill written by Dial that would repeal those restrictions.

Dial, who supported the restrictions in the mid-’90s, said the state was wrong to ever strip local officers — today some 400 departments in all — of this authority.

“I want to try one more time to correct an error I made,” he said.

Dial said local officers are better trained than they were in the ’90s, and there is no real reason to prohibit the work they do to make roads safer.

“This is a matter of public safety and common sense,” said Dial. “We can make a real impact on the number of traffic fatalities in Alabama each year with the resources we already have, just by repealing these unnecessary restrictions on our local law enforcement.”

Officers are required to work many accidents along the interstate — a good portion of which speeding was a factor — but can do nothing to enforce limits and slow people down, Stilwell said. Police dispatch is also inundated daily with calls about people traveling at a high rate of speed on I-65, he said.

“I can’t do anything about I-65, where we have our more serious accidents,” said Stilwell.

Stilwell also responded to critics of the bill, who say changing the law will lead to “speed traps” and more ticketing.

The city of Clanton collects $17 per speeding ticket — which makes up just a fraction of the police department’s $2.2 million budget, Stilwell said.

He also said his department doesn’t have the manpower to have officers “sit on I-65 and run radar.”

“Hopefully with its passage, we’ll be able to do what I feel we need to do for our people,” Fulmer said.

The ability for officers to enforce speeding inside police jurisdictions will make a real difference in Jemison, Fulmer said.

While the city only patrols about three miles of I-65, Fulmer said many people call wanting the police department to address speeding outside the city limits but still within the city’s jurisdiction.

Stilwell and Fulmer said the proposed bill has earned support from law enforcement agencies across the state.

Dial’s bill, Senate Bill 33, and a similar bill by Chilton County State Sen. Cam Ward are likely to be combined into one bill. Ward was unable to attend Tuesday’s press conference.