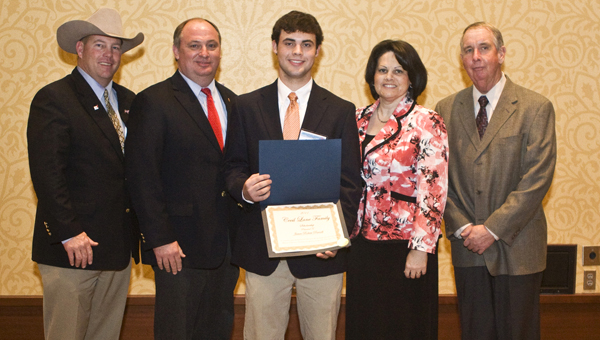 Parnell is the son of Jimmy and Robin Parnell. He will graduate from Autauga Academy with a GPA of 3.9 this year. He was Mr. Senior High at his school and also involved in the Beta Club, Spanish Club, Art Club, 4-H, and was on the baseball team.

He is also actively involved in the Chilton County Jr. Cattlemen’s Association, where he served as president and attended the 2010 ALFA Leadership conference.

Parnell looks to major in animal sciences at Auburn University in hopes of having a career as a large animal veterinarian.

The beef industry is the second largest segment of Alabama’s farm economy representing a $2 billion industry with annual sales of cattle and calves exceeding $450 million.  The Alabama Cattlemen’s Association, founded, in 1944, is one of the nations largest state cattlemen’s associations with an annual membership of 12,000. For more information, visit the ACA website at www.bamabeef.org.