Tigers could benefit from new facility 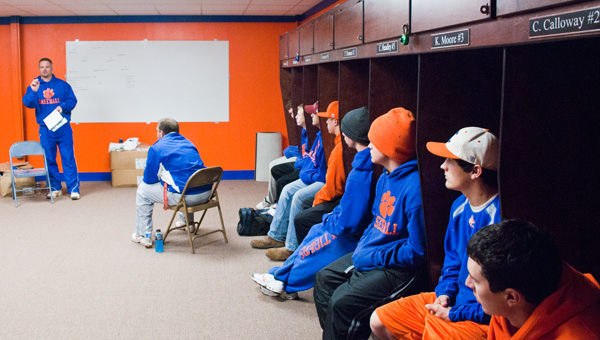 There are plenty of reasons for Chilton County baseball coach Josey Shannon to be optimistic about his team this season.

One is the construction of a new hitting and locker room facility at Jack Hayes Field, where the Tigers play home games. 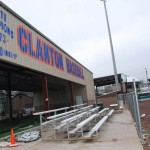 Chilton County’s new hitting facility and locker room sits behind the team’s dugout on the first base side of Jack Hayes Field.

The locker room doubles as team meeting space that the Tigers never had before. There is a 42-inch flat screen TV with the latest filming technology so players can study their swings.

And the covered batting cages, spanning about 2,200 square feet, allow the team to practice no matter the weather.

“On days that people are taking off, we’re still working,” Shannon said. “When you only have three weeks to get ready for the season, every minute counts.”

But Shannon said he thinks the facility will help the team more mentally than physically because it will allow them to bond.

Movie nights are a possibility, and the players will no longer have to dress in vehicles or take turns using a small locker room.

“It will eliminate the distraction of everything else going on around before games,” Shannon said.

An upstairs part of the facility, when complete, will include a coach’s office with a view of the field and an umpires’ dressing room.

Shannon said many community members helped with the project, from donating money to helping with construction.

One of the most significant contributor was Rick Russell, parent of an eighth grader in the program and also Clanton’s building inspector, and Sally Walls, director of Clanton Parks and Recreation.

Shannon estimated the total cost of such a project would be around $100,000.

“Everything we’ve got has been voluntary work or donations,” Shannon said. “It’s been a community affair to try to get this thing built for the season.

The new facility is just the latest upgrade at Jack Hayes Field. In the last three years, the dugouts and backstop have been renovated, new lights have been installed and a new outfield fence put up.

Tigers will rely on pitching, speed

Then there are the players that will take advantage of their fancy new facility this season.

The team will be young in age but experienced in terms of varsity games played.

Kip Moore, a junior and last year’s shortstop, will likely move to third base.

“I think he fits that role a little better,” Shannon said. “He’s a tough kid with a lot of athletic ability. He’s got that good arm and quick reaction that you need for the hot corner.”

Freshman J.D. Minor could step in at short.

At first base, Shannon is considering a platoon with junior Delondre DeJarnett and sophomore Ryan Baker.

Baker played on the junior varsity squad last year, but DeJarnett’s progression has been more unorthodox.

DeJarnett, who has also excelled on the CCHS football and basketball squads, hasn’t played baseball since his freshman year, but his power at the plate is cause to get him at-bats.

“He’s got uncoachable power,” Shannon said but added DeJarnett is still raw because of his lack of varsity experience. “If he ever figures it out, he’s going to be a force to reckon with.”

The rest of the lineup will look pretty similar to last season, but there is still a lack of upperclassmen: catcher Craig Headley, second baseman Tyler Crowson, center fielder Cameron Cummings and right fielder Trevor Thomas are all sophomores, and new left fielder Blake Teel is a freshman.

The squad’s strength should be its speed and pitching.

Ace Chance Calloway, a senior, can be dominant; and he will be joined in the pitching rotation by Cummings, junior Weston Harris and Thomas.

Another senior, Adam Minor, is a third baseman by trade, but an arm injury will prevent him from playing in the field at least for the beginning of the season. Minor will still be one of the main contributors at the plate.

Shannon said there are no less than four Tigers–Crowson, Cummings, Moore and Thoams–who run the 60-yard dash in less than 7 seconds.

“I played college ball, and there would be years we didn’t have four guys that ran sub-7,” Shannon said. “We’re going to use our athleticism to put pressure on the other team. That’s my style of baseball: Get ’em on, get ’em over and get ’em in.

“What we lack in experience we make up for in athleticism.”

CCHS begins its 2011 campaign with a doubleheader against Alabama Christian beginning at 3:30 p.m. Monday.

Despite having only one senior and “quite a few new faces” on the team, Verbena softball coach Jennifer Ingram said... read more