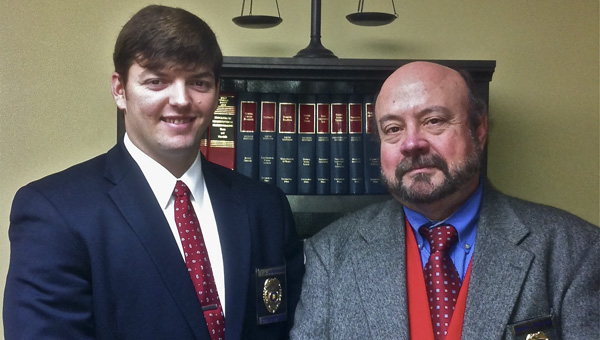 C.J. Robinson has been promoted to deputy district attorney for the Chilton County office.

Robinson is a 2001 graduate of Chilton County High School, where he was valedictorian, class president, four-sport athlete and recipient of the 2001 Bryant Jordan Scholar Athlete Award.

In 2003, Robinson completed his undergraduate degree from the University of Montevallo at the age of 19. While obtaining his Bachelor of Science degree in political science with minors in history and pre-law, he was inducted into five different honor societies, graduated with Highest Honors, and was the recipient of the 2003 Algernon Sydney Sullivan Award.

After receiving his undergraduate degree, Robinson attended Mississippi College School of Law. While attending the second oldest Baptist College in America, he served as the president of the Christian Legal Society, a religion columnist for The Legal Eye, an extern in the Office of Capital Defense and received the 2006 American Jurisprudence Award for Trial Advocacy. He graduated in May 2006 and was admitted as an attorney to the Alabama Bar in October 2006.

Robinson worked in the areas of general practice and corporate law before coming to the District Attorney’s Office in January 2008.

He also enjoys being active in the community. He is a member of the First Baptist Church of Clanton. Recently, he was elected vice chairman of the Chilton County Republican Committee, and he will be serving as an executive committee member for the party.

Robinson has also worked in multiple positions with the Hugh O’Brian Youth Leadership Program, ranging from an Ambassador in 1999, to a member of its Executive Committee since 2003.

In reference to his new position with the Office of the District Attorney, Robinson says, “It is a privilege to serve the public and make an impact right here in my home community. I embrace the great responsibility that comes with being a prosecutor. Micah 6:8 tells us, ‘What doth the Lord require of thee, but to do justice, and to love mercy, and to walk humbly with thy God.’ The Lord has blessed me with a tremendous opportunity and I hope to honor Him in what I say and what I do. I look forward to continuing to represent the state of Alabama and the citizens of Chilton County.”

In 2011, the Office of the District Attorney handled over 29,000 cases with 9 assistant district attorneys circuit wide.

“I am certain C.J. will continue to offer capable representation for the people of the 19th Circuit, while also providing a voice for victims of crime through his experience and empathy,” said Houston.

Veteran presence: Jemison’s Kyle Dennis, left, and Alex Campbell are part of a group of veterans hoping to accomplish much... read more