Maplesville’s fifth baseball coach in as many years has reason to stick around.

Brandon Shanks is a former Red Devil himself, pitching and playing first base until his graduation in 2000. 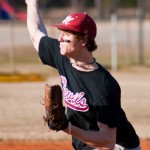 “The program means a lot to me,” Shanks said before Maplesville began an intrasquad scrimmage Wednesday.

MHS baseball brought home a state championship in 1996 but as recently as 2009 won only a handful of games.

The lack of a consistent dugout presence since long-time Coach Mike Blair retired following the 2007 season could not have helped matters, but a core group of seniors this season hopes to lead the program back to glory.

Twin brothers Blake and Tyler Crumpton, and Bobby Smith are all seniors and will form a chunk of the Devils’ pitching rotation.

The only other senior on the team is James Madsen, who will anchor the heart of the lineup and play shortstop.

Though short in numbers, Shanks said the seniors have provided leadership for a team that includes only two juniors, one sophomore and a bunch of freshmen.

“I think it’s sunk in with them, knowing it’s their last year,” Shanks said. “I tell them every day, ‘It’s up to you guys.’ What you do for these younger guys will last long after you’re gone.”

Adding to the pitching depth, which Shanks said should be the team’s strength, are juniors Aron Smitherman and Jared White.

White will catch when not pitching, and Smitherman will play a corner outfield position.

If the pitchers perform to their capabilities, it could be a special season for the seniors—and for Shanks, who said he always had a feeling he would return to the school’s baseball field as a coach.

“I knew I wanted to, eventually, come back home,” he said. “I was very fortunate.”

Devils expect another trip to state