Devils expect another trip to state 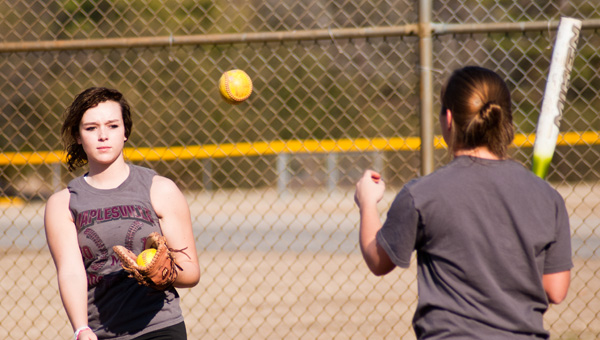 Senior season: Maplesville seniors Courtney Baugh, left, and Courtney Killingsworth hope they can lead the Red Devils to a third consecutive berth in the Class 1A state tournament.

Don’t tell the Maplesville softball players they will be hard pressed to earn a third consecutive berth in the Class 1A state tournament following the loss of three crucial seniors.

Catcher and team heartbeat Heather Chambers, scrappy second baseman Bayne Edwards, and leadoff extraordinaire and center field star Katlyn Freeman may all be gone, but a trio of returning starters—plus some reinforcements—have the Red Devils thinking they could be playing in Montgomery’s Lagoon Park once again.

Pitcher Courtney Killingsworth, a senior, is The Clanton Advertiser’s reigning Player of the Year.

As much as the Devils will miss Chambers, MHS Coach Ashlie Harrison said Courtney Baugh could provide a seamless transition.

Baugh is a senior who sat out last season after transferring from Shelby Academy.

Third baseman and pitcher Autumn Smith, a sophomore, could replace Freeman at the top of the lineup

“There are people stepping up and filling those roles,” Harrison said. “Everybody seems to be really working well together. It was almost like, with losing those three leaders, that everybody is on a level playing field.”

The Devils have had a taste of the state tournament, and they want more.

“We have made it to state, and their goal is still to do that well. They’re not expecting less just because we graduated some people.”

Isabella juniors Nick Noah (batting) and Sawyer Cahalane (catching) are two of only six Mustangs that enter the season with... read more