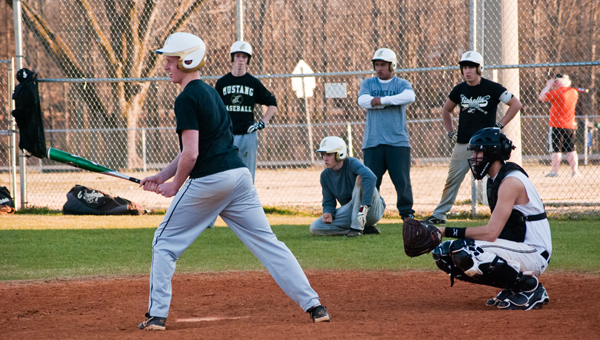 Isabella juniors Nick Noah (batting) and Sawyer Cahalane (catching) are two of only six Mustangs that enter the season with varsity experience.

One theme will connect Isabella’s baseball and softball teams this season: replacing players lost to graduation from last year’s squads.

As would be expected, Cahalane and Haigler will form the nucleus of the team, along with senior Cody Smith and junior Nick Noah.

Cahalane, Haigler and Noah—who posted a 5-0 record last season—were three of Isabella’s four main pitchers in 2010 (the other was Haigler’s older brother Sean).

“If anything ought to be our strong point, it’s pitching,” IHS Coach Clay Shearer said.

It’s the rest of the starting lineup Shearer will have to figure out.

Cahalane, who will play catcher and third base in addition to pitching hit for a .400 average last season; and Austin Haigler wasn’t far behind at .375.

Those two will anchor the Isabella lineup in Shearer’s second season.

But out of 16 varsity players, only six have varsity experience. Still, Shearer said he has been encouraged by the younger players’ attitude.

“They hustle, and they work hard,” he said. “We’ve been getting after it.” 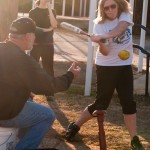 Kacie Adams is one of a few new Mustangs softball players that coach Mike Ratliff (seated) needs to perform like veterans.

The Isabella softball team won’t be breaking in a ton of starters like their baseball counterparts but instead will have to replace one crucial component: Raelynn Liveoak, who starred at bat and in the field and served as her team’s main pitcher for her entire varsity career.

Liveoak missed much of the regular season last year, but one of her replacements, Dezaray Lodge, was a senior herself.

The other was Kinslee Mims, who returns the Isabella rotation, but the sophomore will have some competition.

Eighth grader Chelsea Cox and seventh grader Caley Booth both look to play important roles in the pitcher’s circle, Coach Mike Ratliff said, but the goal is to find one pitcher who can dominate.

“We’ve got to have that anchor pitcher,” he said.

Cox and Booth have both excelled in the travel ball ranks, as has fellow newcomer Kacie Adams, an eighth grader who will probably play first base.

Cox and Booth will split time between pitcher and shortstop.

“It’s just getting them that game experience quickly,” Ratliff said about breaking in the rookies. “I’m anxious to see how some of them respond.”

Some youngsters will be counted on, but most of the Mustangs lineup will be experienced.

Mims will play second base when she’s not pitching, and Kaylynn Culp at catcher, Sarah Wooldridge in the outfield, Ann Marie Murray in the outfield and Kristen Adams at third base all have starting experience.

The Mustangs’ first game will be Feb. 24, when Autaugaville visits.

The first contests for the baseball team will be a doubleheader at Maplesville on Feb. 21.