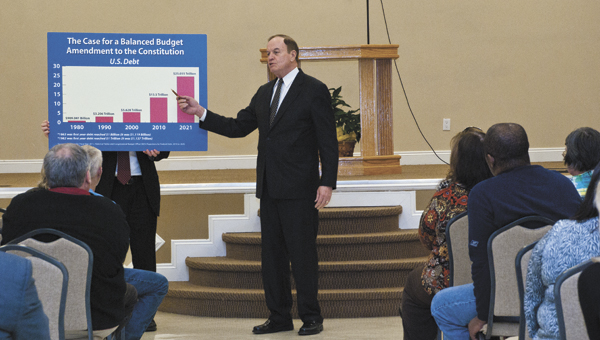 Sen. Shelby speaks about the balanced budget amendment he proposed again this year.

Having made the trip at least annually for 33 years now, U.S. Sen. Richard Shelby paid a visit to Chilton County on Friday.

The townhall meeting was held at the Jemison Municipal Complex off U.S. 31.

Introduced by Circuit Clerk Glenn McGriff, Sen. Shelby (R-Tuscaloosa) addressed the legislative agenda for the 112th Congress as well as other important issues facing the nation and the state.

Shelby went on to speak about taxes, Obama’s healthcare plan, the debt limit and more.

“I voted against the Obama healthcare plan,” said Shelby. “Healthcare is not cheap, it’s not perfect, but we should be building on what we have instead of tearing it down. When you ration healthcare – you ration life.”

On taxes, Shelby said: “We need a new tax code. The tax code is not made for you and me. It’s for over the years and for the people who can lobby, but not for you basically.”

Following his remarks, Shelby opened the floor to questions and comments from the audience.

Joe Mims, president of the Chilton County Board of Education, spoke about federal intervention in local school decisions. Shelby agreed and went on to respond, “The Board of Education is not bettering education, it’s becoming a bureaucracy.”

Isaac Graham, who is in the fifth grade at Isabella, is congratulated Thursday after he won the Chilton County Spelling... read more