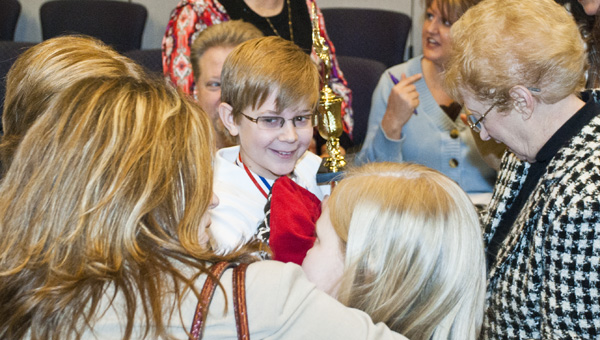 Isaac Graham, who is in the fifth grade at Isabella, is congratulated Thursday after he won the Chilton County Spelling Bee by correcting the spelling of the word “mischievous” and then nailing “espionage.”

Chilton County’s top two spellers seemed primed Thursday to force bee organizers to find a new list of words until an extra “I” was inserted after a “V.”

Isaac Graham, fifth grader at Isabella, jumped at the opportunity, correcting the spelling of “mischievous” and breezing through “espionage”—as he had 15 other words—to win the Chilton County Spelling Bee.

Graham said he wasn’t intimidated by the situation—taking turns with the county’s best spellers in front of judges, moderator Sally Pitts of WSFA television news, and audience members at the Alabama Power Conference Center.

“Actually, we had a lot less people here—we had about 200 at the school,” Graham said about the IHS bee.

Each school winner advanced to the county bee, and Graham advances to the state spelling bee March 5 at Oak Mountain High School.

Graham said he studied a provided list of words for about a month before the bee, and his competitors obviously did their homework, too.

They went through 229 words, and the provided list included 250 words. Had it been exhausted, officials would have turned to an alternate list.

All contestants spelled their way through the first three rounds, but then three consecutive spellers were tripped up on “sachet,” “preferable,” and “yippee.”

“Reversible” was also missed in the fourth round.

The final five proved to be a resilient bunch but eventually thinned thanks to “aquiline,” “homage,” and “nostalgia.”

Three locals named among Who’s Who

Three University of Montevallo students from Chilton County have been named to “Who’s Who Among Students in American Universities and... read more