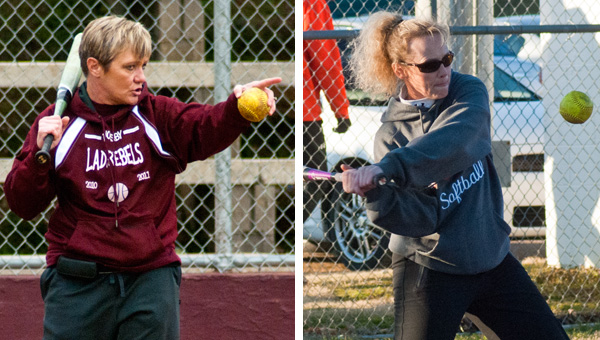 When Chilton County’s softball team visits Thorsby on March 10, the game will feel both familiar and strange at the same time.

Familiar because the two coaches, sisters Kim Payton and Krisi Parrish, grew up together around the game. Strange because the pair will be in opposing dugouts.

“We’re not really competing against each other,” Krisi Parrish said. “I want her team to do well.”

The sisters played league softball together—Kim was the shortstop, and Krisi played second base—and this season will have a chance to get reacquainted on the softball diamond.

Parrish, the younger sister by five years, is the longer tenured coach. She’s entering her fifth season at CCHS.

Season 4 included The Clanton Advertiser’s Coach of the Year honor as the Tigers fell one game shy of the Class 5A state tournament.

All but one starter returns from that squad, so much is expected in 2011.

Parrish is also encouraged by the fact that almost every Tiger participated in a travel league, meaning the players shouldn’t have any rust to shake off.

“I still think confidence will be an issue,” Parrish said. “Mentally, we’ve got to believe we can do it.”

Payton, meanwhile, is Thorsby’s third coach in as many seasons, following Rachel Argent and Nicole Hilyer.

Payton coached the team in 1999, but at that time the school competed in slow pitch softball.

Helping Payton and the Rebels get up to speed has been assistant coach Holly Cleveland, who started at THS until 2005.

Cleveland was named an all-state pitcher and led the Rebels to five consecutive berths in the state tournament before graduating.

If only there was such an accomplished pitcher on the roster. Last year’s main hurler, Lindsay Pease, was lost to graduation, as were fellow seniors Heather Day (catcher), Ashlin Hilyer (shortstop) and Tiffany Morgan (pitcher).

If anyone can plug the holes, Payton should be able to. She has Cleveland and Parrish to lean on, of course, but she has experience herself.

“I’ve been around it all my life. I like the games, the atmosphere,” Payton said and added that she enjoys being around the players. “They all get out there and hustle—that’s a big part of it.”

Isabella’s boys and Thorsby’s girls on Monday advanced in their respective basketball area tournaments, while four local teams had their... read more