Local actor Grayson Russell has yet another movie notch under his belt with his latest work in ‘The Rainbow Tribe” released on DVD last week.

Playing the lead role, Grayson began working on the movie, his second one, in 2007 at the age of 9. The film took place in California and took four weeks to shoot. 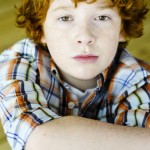 “This movie was different for him from his first role in ‘Talladega Nights,’” said Crystal Russell, Grayson’s mother. “He had a lot of fun shooting the movie, but it was a lot of work in a short amount of time.”

The film, based on a true story, is about a camp counselor who battles a personal crisis and returns home to the summer camp of his youth. In the process, the counselor reunites with his childhood best friend and current camp director, and finds himself as the camp counselor of a group of 10 year olds led by Russell.

“I’ve seen the movie on several occasions, and I thought it was a wonderful movie myself – I am a proud father,” said Jerry Russell, Grayson’s father. “We’ve been anxiously awaiting its release, and I’m excited that it’s finally come out and someone else can see it. It’s a movie for all ages.”

In addition, Grayson has a couple of more roles on his repertoire that will be released soon. Last fall, he shot the sequel to the movie “Diary of a Wimpy Kid: Rodrick Rules” that will be released March 25. He will also play the leading role in the Alien Candy episode of R.L. Stine’s The Haunting Hour that will air Saturday, Feb. 19 on The Hub station.

“I do hope and pray that he is successful in his career,” said Jerry. “He receives compliments on how well and professional he carries himself in the setting. We know he has a gift, it’s whether or not the good Lord continues to open doors for him in this field.”

The independent film is not being sold in stores but can be purchased on the movie’s website.

Also, two local organizations will be selling the DVD as fundraisers. The DVD’s will be available from the Clanton Middle School PTO and from Clanton Intermediate School Relay For Life Team Friday, Feb.11 until Friday, March 4. The DVDs are $20 each and a portion of the proceeds will benefit these organizations.

Between 1-3 inches of rain followed by snow is in the forecast for Chilton County between 5 p.m. Wednesday and... read more