Jemison to lean on few veterans

To fans that show up at Jemison softball games this season: Don’t be confused; those are the varsity players. 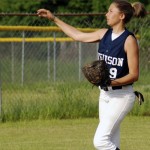 Veteran presence: Shelby Lopez is one of three juniors—there are no seniors—on a Jemison softball team that is loaded with younger players.

One might wonder because the Panthers will be remarkably young.

There are no seniors this season and three juniors—and the rest of the team is made up of sophomores and freshmen, many of which were starring for the junior varsity team in 2010.

The veterans of the team will be juniors Tiffany Guin and Shelby Lopez.

Guin was the Most Valuable Player of last year’s Chilton County Tournament, hosted by and won by JHS, and is one of the county’s best pitchers.

Lopez will have a starting role for the fourth year. She will share time between shortstop, her position last year, and catcher, her position two years ago.

Out of 10 starters last season including a designated hitter, Guin and Lopez are the only two back.

But there are reasons for optimism.

Robinson said this group could be her fastest team since she took the job.

Emily Patterson, a transfer, has excelled in practice and can play any of a number of positions, even pitcher.

Of the other youngsters, Denten Ellison, Shelby Griffin, Katie Hayes, Morgan Lucas, Emily Patterson and Hannah Smith have stood out and proved they’re capable of holding onto starting roles.

“I think we’ll have our moments where we struggle, but I think we’ll also surprise some people,” Robinson said.

Both of the local basketball teams that played in area tournaments Tuesday lost, bringing their season to an end. Loachapoka’s... read more