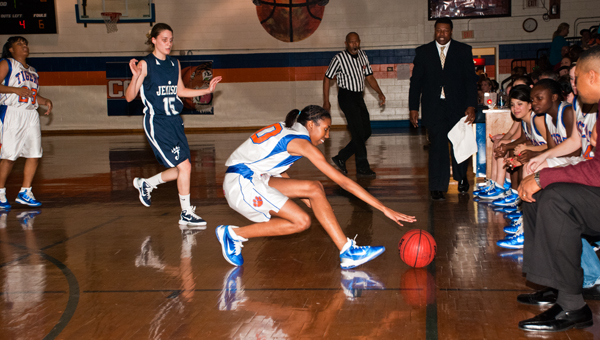 Arm’s length: Chilton County’s Shuntar Washington tries to save the basketball from going out of bounds during Tuesday’s game while Jemison’s Shelby Griffin and the CCHS bench look on.

Chilton County defeated Jemison by 16 points in the county boys basketball tournament on Jan. 14, but Jemison has won both meetings since then to claim the season series over its rivals.

The game featured wild momentum swings. Jemison led by as many as 11 points early in the second period, but the hosts claimed the lead with about 3 minutes still remaining before halftime.

Jemison fought back and built a seven-point edge at the end of the third period, but Chilton tied the game at 63 about midway through the fourth when Nelson Williams assisted on a Quincy Underwood basket.

But Trey Bryant answered with a 3-pointer, and the visitors never trailed again.

Bryant scored a team-high 21 points, and Gates had 19 points. 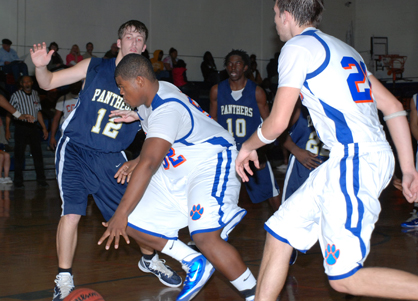 Panthers girls run away from rivals

Chilton County’s girls kept their game against Jemison close early—the score was 10-6 JHS after one period—but Kelsey Mims opened the second period with a 3-pointer and Jemison ran away with the game.

Mims led all scorers with 17 points, while Renee Lewis dropped in 15 points for CCHS.

Playing for a cause: Thorsby’s girls basketball team played Monday’s game against Maplesville in pink uniforms as part of the... read more