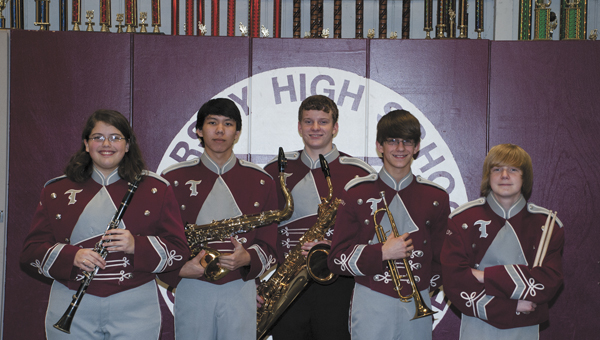 Thorsby High School had five out of six students make first chair for the District Honor Band on Feb. 18 and 19, an event that will be held at the University of West Alabama in Livingston.

The school also had one student to make the All-State Red Band, the highest honor given.

The students who will sit first chair for the District Honor Band and have also made the All-State Band include:

In April, these students will re-audition for chair placement in the All-State Band.

This means, after their re-audition in Mobile they will be placed into the red, white or blue All-State Bands. The red band is the top band in the state, followed by the white and then blue.

“These three bands will make up the most outstanding musicians in the state,” said Pounders.

“I have never been prouder of my students,” said Pounders. “They have worked very hard and have practiced numerous hours for this tryout.  I’m so glad their efforts will be rewarded.”

Sales tax revenue on the upswing

If sales tax numbers are any indication of how the economy is doing, things were slightly on the upswing in... read more