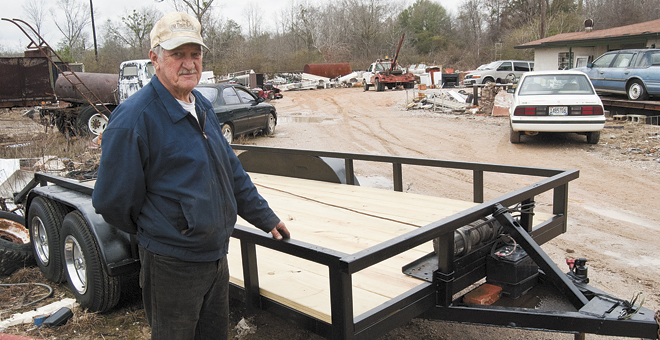 Joe Perkins stands alongside his trailer that was stolen 9.5 years ago and returned Jan. 16 in mint condition and with a note asking the Perkins family for forgiveness.

It’s not unusual in Central Alabama to hear that faith can change someone’s life.

Joe and Judy Perkins have seen evidence of this firsthand.

A trailer that was stolen from the couple was returned recently after 9 1/2 years, refurbished and with a note explaining how the person was attempting to make up for past sins.

The Perkins purchased land off Highway 31 in the area known as Cooper to open a salvage yard.

Before they could even open the business, someone stole a trailer the couple had borrowed to help move merchandise.

Joe Perkins had promised a friend he would take care of the trailer—or buy him a new one if something happened to it.

So, Perkins spent about $900 to replace the trailer, and forked out even more money to put a gate at the entrance to P & P Auto Salvage.

Then, on the morning of Jan. 16, there was the trailer, dropped off at the entrance to the business.

The trailer hadn’t just been returned. It had been painted, the floor replaced, new tires and rims put on, and a winch installed.

“He did a good job of fixing it up, now,” Joe Perkins said.

Sitting on the floor of the trailer was a note, kept in place by a brick:

“This trailer came from here 9 1/2 years ago. I had a bad drug and sin problem. Since then, I have been saved, redeemed from the curse of sin and death. Jesus has forgiven me. I pray you will have mercy and forgive me also. I pray please forgive me in Jesus’ name. I did the very best I could on restoring it. It has a 800 lb. wench [sic], a marine battery, new floor boards and new tires. I pray God will bless you and your family.”

Joe Perkins said he’s glad someone out there has decided to make amends for past transgressions.

“I think we need good news every now and then,” Perkins said. “A lot of people say they get saved, but the restitution doesn’t come.”

Playing for a cause: Thorsby’s girls basketball team played Monday’s game against Maplesville in pink uniforms as part of the... read more