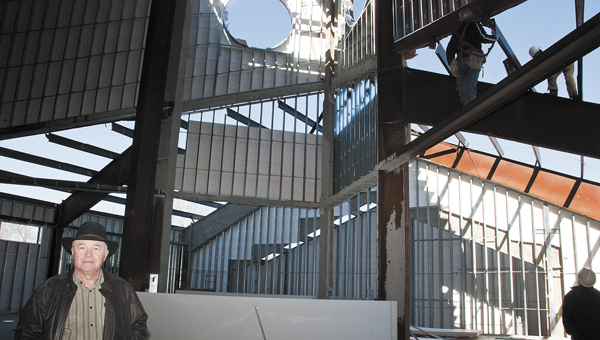 Bigger is better when it comes to the new West End Baptist Church.

After completing phase one of the building project, phase two of the two-story church is now in progress.

Construction on phase one of the new church began two years ago and includes 10 nursery and children’s Sunday School rooms on the first floor, and 10 classrooms for young adults on the second floor.

Also included is a fully equipped circulation desk, an elevator and an outside fenced in play area.

“The circulation desk is what I like the most in this building,” said Pastor Tony Smitherman. “It has a welcome system where parents will check their children in and has monitors that have access to the sanctuary.”

Phase two, the sanctuary, will house a pulpit with the baptism area and dressing rooms behind it, a choir area, wrap-around balcony and seven prayer rooms.

A special needs and senior citizen room will also be included.

On approximately 32 acres of land, the V-shaped building will hold 1,100 seats, including 400 in the balcony.

The second phase was not in the plans to be built, Smitherman said. But the church was fortunate to pay off phase one and received the money to continue building.

“We’re building for the future,” said Smitherman. “Clanton is going to grow, and this is a commitment to the future of our community.”

After the completion of phase two, phase three, another two-story wing on the west side of the new sanctuary, will house additional adult Sunday School rooms and administrative offices.

As for the current sanctuary, it will be turned into a full-size gymnasium and will be completely equipped and certified as a Red Cross emergency shelter.

No decision has been reached regarding the future of the old sanctuary.