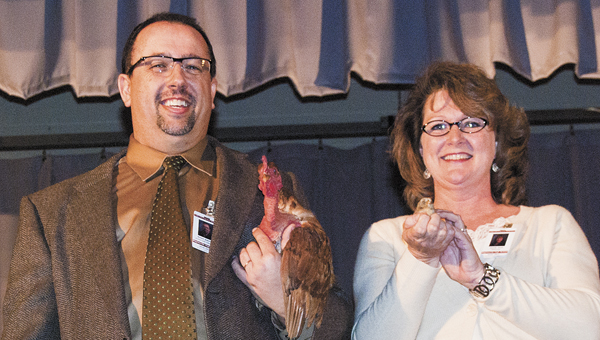 Maplesville High School students assembled in their auditorium to witness Principal Maggie Hicks and Vice Principal Roger Sheffield keep their end of the bargain and lay a kiss on a chicken Friday.

The “chicken kissin” was part of a month-long fundraiser challenge put together by second grade teacher Teresa Stewart, to help raise money for Relay For Life.

Chad Harrison, seventh through ninth grade math teacher and softball coach, was the emcee of the event.

“How many people know someone who had cancer and got rid of it,” asked Harrison.

Many students raised their hands.

Even more students’ hands went in the air.

The school raised $547.42, surpassing their initial goal, which meant both Hicks and Sheffield had to pucker up.

Before the curtains opened revealing the turken (the breed of chicken), the assembly had to stand up and perform the chicken dance, requested by Sheffield.

After the dance, Kathy Hand, “professional turken handler” and seventh through 12th grade science and English teacher, picked the bird up from its cage and held it while the students began the countdown and Sheffield prepared for the big kiss.

When it was Hicks’ turn for the “chicken kissin,” instead of the turken, she brought out a one-week-old chick, cupped in her hand. The students began the countdown and she kissed the baby chick.

Jim Pitts, of the Chilton Research and Extension Center, examines grape vines that have been at the center for several... read more