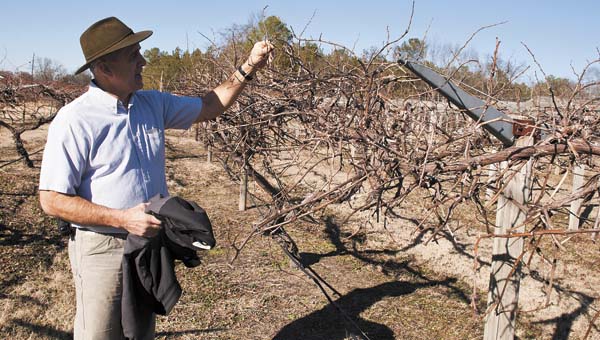 Jim Pitts, of the Chilton Research and Extension Center, examines grape vines that have been at the center for several years. Newer grapes were planted in December with hopes of finding varieties resistant to Pierce's disease.

A new experiment at the Chilton Research and Extension Center could help grape growers fight an increasing problem.

The center is working to help find and develop grape plants with immunity to Pierce’s disease. An insect, the glassy-winged sharpshooter, transmits the disease by infecting plants with bacteria through its needle-like nose.

The bacterium (Xylella fastidiosa) then forms a gel in the plant and causes water to be choked from the leaves, leaving the plant to whither and die.

The disease is particularly tough to handle because “it fits halfway between a bacteria and a virus,” said superintendent Jim Pitts.“[The insect uses the tree] as a food source, and sucks the sap out, and transmits the disease from plant to plant like a dirty needle.”

The disease is nothing new in the Southeast and can’t harm humans, but it does affect grape growers in Alabama and is spreading west to wineries in California as sharpshooters migrate there.

Pitts said the University of Florida managed to develop some strands of grape that could defend against the disease but dropped the program. The hope is the center can find more developments.

“For whatever reason, Florida dropped the program. [Grapes] take a lot of money,” he said. “To make a small fortune in grapes, you’ve got to start off with a large fortune.”

Pitts went on to say that the sharpshooter is now starting to affect the California grape growers.

“What’s happened is this insect has now made its way west, and now it’s in California,” said Pitts. “Out there, they’ve come up with these three varieties, and they got some degree of resistance to Pierce’s.”

The center near Thorsby was contacted by the project leader at Auburn about helping test the three varieties’ resistance here. The grapes were planted in December.

While Pitts said the grapes will take up to three years to grow into fruit, the possibility of having a strand that can beat Pierce’s is worth the wait.

“We’re in the cutting edge of finding something here. If one of these varieties they bring in here happens to be the [type of grape resistant to Pierce’s], it’d be a once-in-a lifetime thing,” he said.

“It would be just like going in and hitting a home run your first time at bat.”