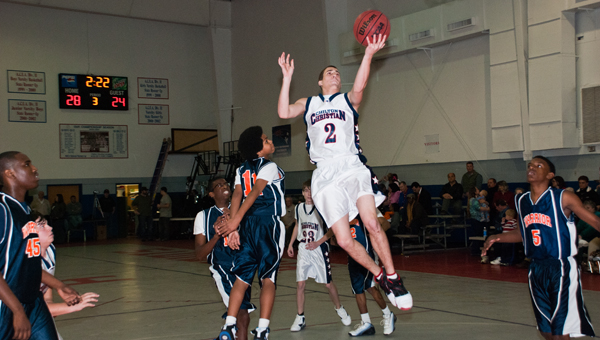 Up for 2: Chilton Christian Academy’s Matt Klein, above, drives for two points Friday against Warrior.

CCA built a 16-6 lead after one period on the strength of several deep jump shots, including two 3-pointers by Ryan Kirkland. 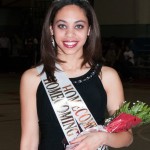 Senior Kristen Robbins, right, was crowned the school’s Homecoming Queen at halftime of the game.

The Patriots’ edge was 22-18 at halftime and 32-28 at the end of the third period, but Warrior went on an 11-2 run to begin the fourth period with CCA’s leading scorer, Tyler Gray, on the bench with four fouls.

Gray returned shortly thereafter, and CCA even tied the game at 41 with 3:12 remaining in the game when Matt Klein stole the basketball on one end and layed it in on the other end.

But Warrior’s Markell Gray responded with a similar play with 57.5 seconds left to play, was fouled in the act of shooting, and made the free throw for a 44-41 lead.

The Patriots got off a couple of 3-point attempts after that but could not connect.

It was a disappointing end to the school’s Homecoming—senior Kristen Robbins was crowned as queen at halftime—but the Patriots had an excuse.

They didn’t arrive home until about midnight the night before after a triple overtime, 68-67 win—their first of the season—at Brooklane, in Hueytown.

Tyler Gray led CCA Friday with 14 points. On Thursday, he recorded 30 points, 28 rebounds and five blocks, while teammate Kirkland also had a double-double with 16 points and 10 rebounds.

By James Dubuisson | Special to the Advertiser With three games left in the basketball season, Thorsby’s boys and girls... read more