CCHS won, 71-64, less than two weeks after defeating the Red Devils, 57-45, in the championship game of the Chilton County tournament. 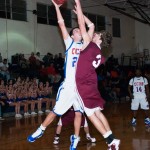 Chilton also defeated MHS, 63-36, on Jan. 6, but even that game was close as late as the third period.

The Tigers scored on their first seven possessions and took an early 18-6 lead on Thursday, but visiting Maplesville (9-11) hung around until a steal and layup by Cameron Morrow with 3:53 remaining in the second period gave the Devils their first lead, 28-27.

CCHS regained the lead, 35-34, by halftime but could only grow it by point by the end of the third period, leading 51-49.

The Tigers (10-11) led by as many as seven points late in the fourth thanks to an effective half-court trap defense spearheaded by guards Joe Looney and Nelson Williams.

The hosts also depended on a two-headed scoring output: Williams had a team-high 22 points, and Grantland Karn scored 21 points.

Maplesville’s girls basketball team controlled the paint on both ends of the floor on Thursday to earn a 50-34 win... read more