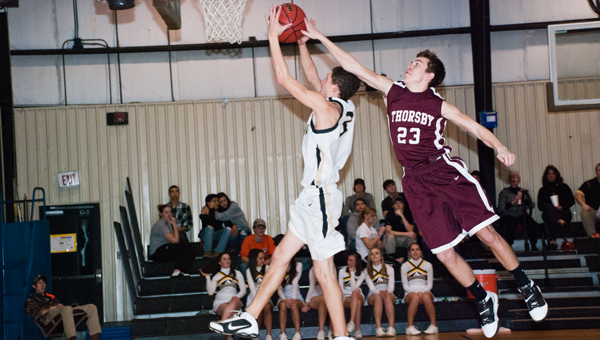 Out of nowhere: Isabella’s J.D. Lenoir, left, appeared to have an easy layup before Thorsby’s Jace Maddox soared in from behind for a block during Tuesday’s game.

Isabella, playing on its home court, closed the first period on an 8-0 run to build a 15-10 lead.

An Andrew Farris 3-pointer gave Thorsby an 18-17 lead with 5:02 remaining in the second period, but too many times the Rebels (6-11) misfired from beyond the arc instead of attacking Isabella’s zone defense.

IHS’s J.D. Lenoir answered Farris’ shot with a triple of his own, and the hosts would hold the lead until there were 41 seconds left in the third period, when Farris drained the third of his 3’s to tie the score at 32.

Farris added a field goal as time expired to give Thorsby its first lead since the game’s opening moments.

THS led by as many as 11 points in the fourth period, as its defensive pressure, fast offensive pace and higher number of substitutes began taking a toll.

Farris led all scorers with 21 points.

Haigler and Thorsby’s Parker Bryan weren’t far behind with 19 points each.

By James Dubuisson Thorsby’s boys basketball game against Billingsley on Thursday was a nail biter, as the Bears’ 53-51 win... read more