Jemison’s girls team overcame a sluggish first half Monday and almost pulled out a win.

The game was tied at 2 after one period of play, and Holtville took a commanding 12-3 lead into the locker room at halftime. 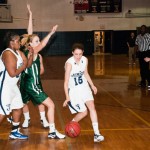 Drive by: Shelby Griffin (15) drives for Jemison against Holtville on Monday while teammates Tika Nunn, left, and Kelsey Mims look on.

The visiting Bulldogs led 16-7 going into the final quarter, but the JHS offense awoke.

Holtville took the lead right back, though, and then the teams traded nine consecutive turnovers until Caroline Currey banked one in with 15 seconds left on the clock to give the visitors the win.

Jemison got off a 3-pointer that would have tied the game, but it was off the mark.

Eric and Shunn Bailey are nine years apart in terms of age, but they’re close in terms of interests and... read more