2 Panthers near 20 points in win 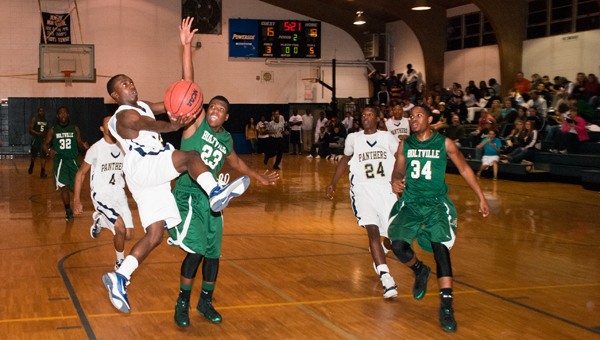 Hoop and the harm: Jemison’s Javae Swindle goes up for two points Monday against Holtville. Swindle was fouled on the shot and added the free throw for a 3-point play.

Both Trey Bryant and Javae Swindle scored 19 points for Jemison on Monday as the Panthers defeated Holtville, 66-59, in boys basketball action.

Bryant scored most of his points on four 3-pointers, while Swindle racked up easy baskets after forcing steals in Jemison’s full-court pressure defense.

Swindle did have two 3-pointers near the end of the first half, and such a shot by Zak Kaylor on Jemison’s last possession gave the hosts a 34-26 lead at the break.

Holtville hung around because of poor shooting by JHS in the second half, but the Panthers (11-10, 1-5 area) still had a double-digit lead until a Holtville desperation heave at the buzzer went in.

“Defensively, we did a pretty good job,” Coach Stacy McGehee said. “We just couldn’t throw it in the ocean (on offense).”