Eric and Shunn Bailey are nine years apart in terms of age, but they’re close in terms of interests and ambitions.

The two brothers coached against each other in Friday’s Billingsley-Maplesville girls basketball game—which was won by visiting Billingsley, 42-41 despite a Maplesville comeback from 14 points down—the first time they had been on the same court competitively since, 2001, when Eric was an assistant coach at MHS and Shunn was a senior player. 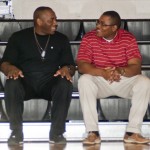 Just one year later, Eric, who graduated from the school in 1992, would take over as head coach, and Shunn had an example to follow.

“He was my Michael Jordan idol,” Shunn said. “Everything he did, I wanted to do.”

So, it was no surprise Shunn got into coaching.

The Billingsley coach said he always wanted to play as long as he could, but there came a point where he realized he wanted to be around sports even if it wasn’t as a player.

The Clanton Advertiser ran a story during the 2001 season when Bailey scored the 1,000th point of his career. He told the reporter that when his playing days were over, he wanted to be involved in some other way.

But his relationship with his older brother wasn’t always rosy.

“There were good things about it and bad,” Eric said.

Shunn, 27, said he realized later Eric, 36, simply had high expectations for him.

“He was just trying to make me a better person and a better player all around,” Shunn said. “He just knew what I was capable of.”

Shunn said the experience of playing for his brother was the beginning of his coaching career.

As for advice since then, Eric, familiar with the hardships sometimes associated with coaching high school athletics at a small school, said he told Shunn just one thing: “Make sure that’s what you want to do.”