CCHS was down 17-9 about midway through the second period, with Marbury playing quicker and more aggressive basketball, crashing the offensive boards and coming up with most of the loose balls. 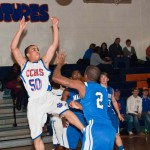 Fade away: Corey Benson of the Chilton County High School basketball team shoots over the Marbury defense during the third period of Thursday’s game.

But the Tigers closed the first half on an 18-4 run, capped by a short Grantland Karn jump shot at the buzzer to make it 27-21.

Chilton still led by six points, 36-30, after the third period, but in the fourth, Marbury increased the defensive pressure on its hosts and cut into the lead.

The Bulldogs took control of the basketball, down by one point, with 46.9 seconds remaining on the clock, but a disjointed possession led to a time out with 14.1 seconds left.

That’s when the ’Dogs drew up an inbound play for Robinson that worked to perfection.

CCHS’s Nelson Williams pushed the ball up court and got off a short floater, but it was off the mark and a scramble for the rebound ended with the final horn sounding.

A Chilton County player tries to save the basketball from going out of bounds during Thursday's game. Chilton County’s girls... read more