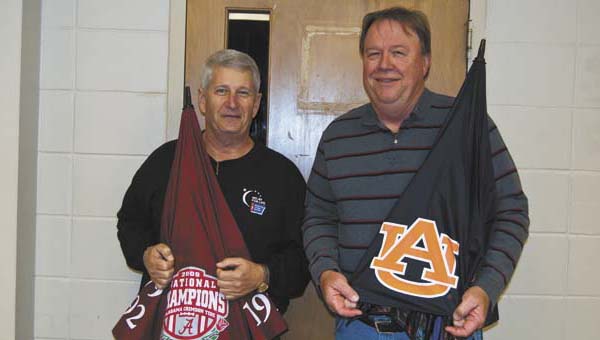 Jerry Grooms, left, and Chuck Calloway went home with the big prize during Thursday’s Relay For Life kick-off auction. The Alabama and Auburn collectible umbrellas were donated by MorLyn’s and went for $105 apiece. Proceeds from the auction go toward the American Cancer Society.

Relay For Life 2011 was officially kicked off Thursday night at LeCroy Career/Tech Center.

The kick-off included various parts, from a somber luminary program to a lively auction over Alabama and Auburn collectible umbrellas.

During the luminary program to honor or remember loved ones with cancer, Relay Committee chairwoman Ann Glasscock read a poem and Voices of Hope choir sang.

Earlier in the night, Donna Nelson talked about how cancer has affected her family and why she participates in Relay.

A silent auction was held to raise money for the American Cancer Society, and Tommy Glasscock auctioned the two collectible umbrellas donated by MorLyn’s Fine Jewelry. Jerry Grooms went home with the Alabama umbrella, while Chuck Calloway captured the Auburn one. The two men bid $105 apiece for the umbrellas.

Fundraising and team goals for this year’s Relay, which will be held the last Friday in April (the 29th), were also announced.

The total fundraising goal for this year is $199,615. Organizers want to have 52 teams participate and have 140 cancer survivors be part of this year’s Relay.

Several churches, groups, schools, families and businesses have already organized teams for this year. Registration can be done online at relayforlife.org/chilton.

A Chilton County player tries to save the basketball from going out of bounds during Thursday's game. Chilton County’s girls... read more