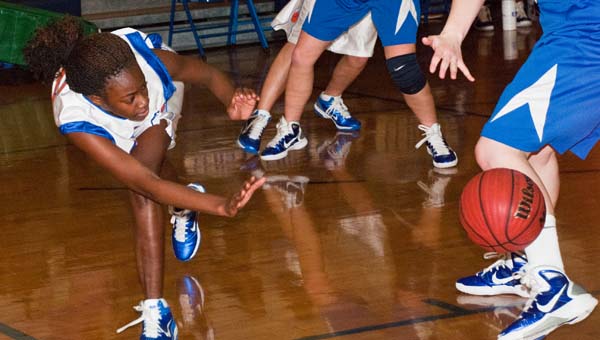 A Chilton County player tries to save the basketball from going out of bounds during Thursday's game.

Chilton County’s girls team was tied with visiting Marbury at 4, but it was downhill from there as the Tigers lost, 54-27.

MHS went on a 10-0 run from that point, and the streak only ended by a Jalise Taylor free throw.

Still, Marbury led 14-5 after one period, and continued building the lead from there, gaining a 29-10 halftime advantage and a 43-13 edge to end the third period.

Renee Lewis added nine points for the hosts (no other Tiger had more than one point), and Amanda Iser had 12 points for Marbury.

By James Dubuisson Thorsby’s boys basketball game against Billingsley on Thursday was a nail biter, as the Bears’ 53-51 win... read more