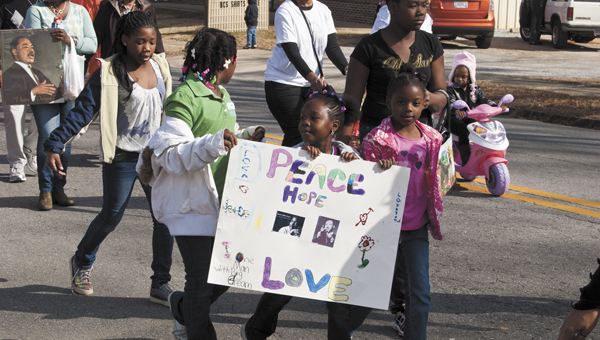 Numerous residents demonstrated their support in remembrance of Martin Luther King’s legacy by attending the parade and the program that followed at the E.M. Henry Skills Center in West End.

“I appreciate you all getting together and celebrating this occasion,” said Mayor Billy Joe Driver as he spoke at the program. “I think the crowd is getting larger every year.”

“We’ve come a long way, and we have a long way to go, and we’re going to get there by the grace of God,” said Driver.

Atchison, who delivered a crowd-moving speech to the audience, said, “All of our life, we need to say yes to the Lord because it is the Lord who brought us here and not we ourselves.”

At the conclusion of the event, Binion, along with his wife, Lucy, who coordinated the day’s events, gave back to the community by drawing names from a raffle. First prize received $250, second $150 and third $100.

“We just want to put the money back into the community,” said Binion. “It’s all about the community. Even if I am not here, we need to continue the movement to help open the eyes of the people.”