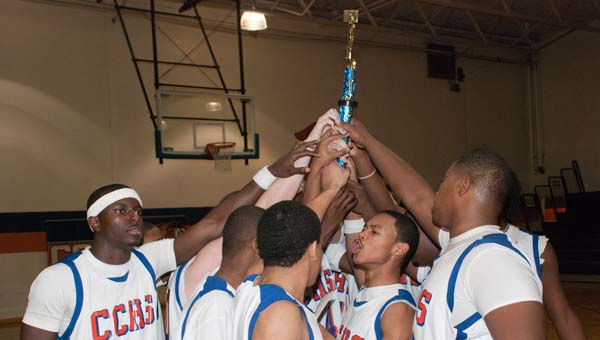 CCHS won its ninth consecutive tournament championship, 57-45 over Maplesville on Saturday, but this title is noteworthy because it’s the first in the streak to come while the team was not under the direction of former coach Donnie Hand (Cain Young was on the bench instead). 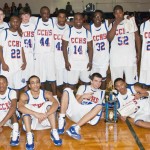 For Thorsby, who won 40-27 over Verbena, it was the second county title in the past four seasons, and the Rebels made the championship game in both of the other seasons.

Pride in Thorsby’s tournament reputation may have motivated this year’s team, which played its best basketball of the season, Coach Ab Argent said.

“We played hard. We got twice the effort,” he said. “I thought our girls played about as good as we had played all year.”

Thorsby’s usual stars were at their best, but the team also benefitted from contributions from unlikely sources. 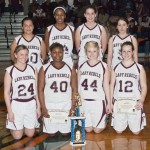 Sanchez was named to the all-tournament team, along with Cooper, Nicole Barrett and Amanda Hubbard.

“We didn’t the turn the ball over as much, we rebounded better and defended better,” Argent said. “I tell them, those three things are usually going to decide the game.”

CCHS, playing at home, didn’t have an easy time with Maplesville, trailing 12-10 after one period.

Part of the problem was foul trouble, as Delondre DeJarnett, Jarvis Rogers, Quincy Underwood and Nelson Williams all picked up two fouls in the first half, earning a trip to the bench.

The Tigers went on an 8-0 run to begin the second half, playing more aggressively and in a full-court pressure defense, but MHS cut the lead to two points on a slam dunk by Anthony Johnson with 2:40 remaining in the third period.

Chilton pulled away behind six points in the fourth from both Grantland Karn and Nelson Williams. The pair led CCHS in scoring, with 22 points and 16 points, respectively.

“We had to go earn it,” Young said. “I think we executed our offense down the stretch. We didn’t take many jump shots in the fourth quarter; every shot we got was a layup.

“I think it definitely gives us confidence for the rest of the season. I’m glad we had a close game and we were able to execute in the fourth quarter.”

Earning all-tournament honors for the boys were: DyQuan Floyd, Karn, Underwood and Williams for CCHS; James Smith for Isabella; Trey Bryant and Zak Kaylor for Jemison; Matt Hamner, Anthony Johnson and Cameron Morrow for Maplesville; and T.J. Ray for Verbena.