Thorsby’s girls team used a 16-0 run to end the third period and begin the fourth period to defeat Jemison, 44-34, and advance to the finals of the Chilton County Tournament. 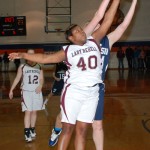 The Rebels will play Verbena at 5 p.m. at Chilton County High School for the county championship.

The game was tied at 26 when Jemison’s Shelby Griffin drained a jumper with 2:59 remaining in the third.

But Thorsby would score 16 points over the next 8 minutes while holding JHS scoreless.

When the Rebels finally knocked the lid off the basket, the game was out of reach.

THS led 26-21 at halftime, but the Panthers fought back before going cold.

Much of the damage was done by Sharonda Cooper, who finished with a game-high 20 points.

Amanda Hubbard had 11 points for Thorsby, and Kelsey Mims led Jemison with 12 points.