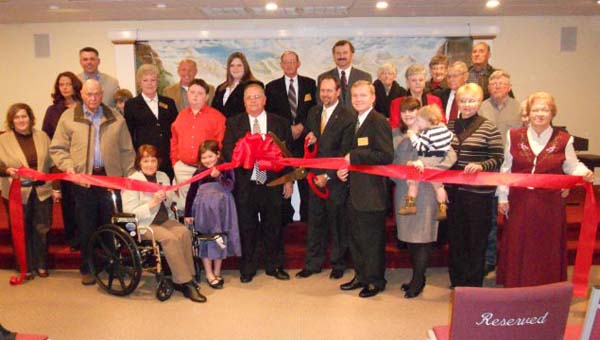 The full-service funeral home is locally owned and operated by Tim Mims and J. Aaron Ellison.

“It was a conglomerate effort between Mr. Mims and myself as something we both wanted to do and saw the need for,” said Ellison. “And numerous individuals from different parts of the county came and approached us about opening a funeral home.”

Ellison said the funeral home’s top goal is to be compassionate to families in their time of loss and provide dignified and affordable services.

“When someone is dealing with the loss of a loved one, they need someone that is compassionate to them and offers dignified service. It’s very important to treat everyone like we would want to be treated,” said Ellison.

The business offers a variety of services including: caskets, vaults, monuments and cemetery space in Chilton Memorial Gardens.

“Two other very important services are that we are an authorized Brown-Service and Liberty National Funeral Home, and we honor all burial policies,” said Ellison.

“We also will bury at any cemetery, and offer the largest selection of monuments from Mims Memorial, one of the largest in Central Alabama.”

The funeral home also offers prearrangements, which they encourage families to do.

Both Mims and Ellison got their start in the funeral business at early ages.

They both began as teenagers at Martin Funeral Home in Clanton and were taken under the Martin brothers’ wings.

Ellison began working in the funeral home business Nov. 8, 2003, at Martin Funeral Home in Clanton and has been involved in the business ever since.

“The Martin brothers took me in as a junior in high school and showed me the ins and outs,” said Ellison. “I worked for them for seven years, and while I did, I attended Jeff State in Birmingham and graduated in 2008 with a degree in Funeral Service Education.”

Mims, who has 34 years of experience under his belt, also got his start in the funeral home business with Jimmy, Bobby and Donny Martin in 1976, at the age of 16.

“It’s something that I have always wanted to do, and it was good for me and my family and I made a good living,” said Mims. “The Martin family was great to take me in at such a young age and teach me the business.”

Mims eventually opened his own business, Mims Memorial in Maplesville and Selma.

Ellison-Mims Funeral Home is located at 1709 Lay Dam Road, which is also Alabama 145.