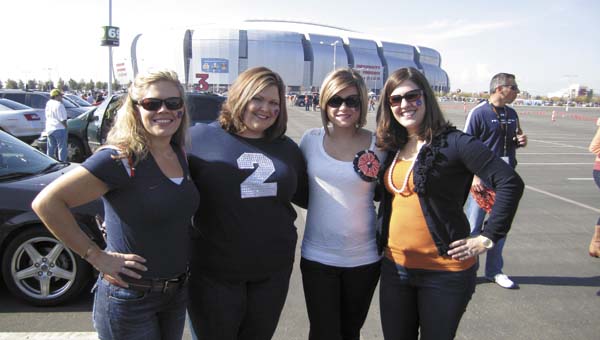 Amanda Bates (second from left) and friends and family attended the BCS National Championship Game on Monday. She is shown with Tiffany Bates Ostertag; Amber Darnell and April Calloway.

Clanton resident and Auburn alum Amanda Bates could barely hold back her emotion while taking her seat in the University of Phoenix Stadium in Glendale, Ariz.

“I cried — it was surreal, and I couldn’t believe it was happening,” Bates said.

Bates and her family and friends, along with a plane full of Auburn fans, flew out of the Hartsfield-Jackson Atlanta International Airport for Glendale last Saturday to watch Auburn battle the University of Oregon for the BCS National Championship.

“The flight to Glendale was fun, we didn’t have any traveling problems; and because we had all Auburn fans on our plane, the flight attendant said a cheer over the speaker, and when the plane landed we all said a chant,” said Bates. “Even the pilots joined in with us. Bobby Lowder was on our flight, so we thought it was pretty neat.”

“Everyone was so nice in Phoenix .and there was orange and blue everywhere,” she said. “We said ‘War Eagle’ to everyone we passed.”

The night before the game, the group attended the official “All In” party sponsored by the Auburn Alumni Association where Pat Dye and past Auburn football players spoke to Tiger fans.

On game day, after arriving at the University of Phoenix Stadium two hours before the game, Bates stood in line for an hour to be admitted.

“Auburn fans love to tailgate, but they did not let us park in the parking lot until 12:30, and it was crowded,” she said. “Everybody had on Auburn colors, but we did see an Alabama fan wearing an Alabama shirt with an Oregon shaker. We saw a lot of people we knew and took pictures.”

Fans were let into the stadium one by one, which was frustrating because there were so many people, she said.

“It was a little chaotic to get in the place,” Bates said. “I don’t think they were prepared enough.”

Bates wore a navy blue shirt with a silver sparkly No. 2 specially made by one of her friends for the event. As she walked into the stadium and reality set in, she became overwhelmed, she said.

“I cried because it was like, ‘Oh my gosh, I can’t believe I’m here’ and when the soldiers came out and saw their families I cried again,” she said.

“When the eagle flew around the entire stadium it was awesome. It was so amazing it made chills come over you.”

Bates and her dad’s seats were located right next to the Auburn football players’ families.

“We talked and took pictures with Cam Newton’s mom and Nick Fairley’s mom and dad,” said Bates. “They are very nice people.”

Auburn fans outnumbered the Oregon fans in the domed stadium.

“I thought I was going to die, I was nervous the whole game — really it was nerve-wrecking,” said Bates. “I was so nervous that my dad started laughing at me and told me not to be nervous because Auburn was going to win.”

After the winning field goal, kicked by Auburn’s Wes Byrum, Bates was overjoyed.

“After Auburn won, Nick Fairley came into the stands where his mom was and hugged her, and he shook all of our hands,” she said. “We wouldn’t trade that experience for the world.”

Bates and her family and friends did not have to worry about the crowd leaving the stadium because they were some of the last people to leave.

“We sat and talked and celebrated with some of the football players’ families after the game,” said Bates. “We took more pictures, and we all had a great time. We didn’t get back to the hotel until about 2 a.m..”

After one eventful weekend in Arizona and one national championship title, Bates flew back into icy Atlanta on Tuesday.

“It was hot on Monday in Glendale, about 60 degrees, so we were shocked when we came back here and it was 30 degrees,” she said. “We saw snow and ice everywhere — it was little scary landing.”

When Bates and her sister, who is from Auburn, returned to Lee County on Tuesday, they took a trip downtown to the intersection of College Street and Magnolia Avenue and took pictures at the toilet tissue teepee of Toomer’s Corner.

“It was the best experience ever,” Bates said.