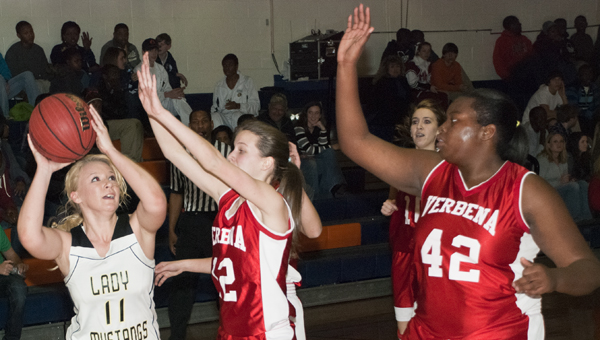 Nowhere to turn: Hope Driver, center, and Marqueska Deramus, right, helped Verbena hold Felicia Brasher and Isabella to 12 points in the second half Thursday, allowing the Red Devils to come back from an 11-point halftime deficit.

Verbena’s girls and Maplesville’s boys basketball teams quashed the notion that being forced to play two days in a row would be a disadvantage.

Like they did on Wednesday, both teams won on Thursday—Verbena 36-33 over Isabella and Maplesville 39-30 over Thorsby—and advanced to the finals of their respective brackets in the Chilton County Basketball Tournament.

“My kids played,” Verbena coach Jonathan Shedd said about his team’s effort, but it wasn’t a given, considering the Red Devils grinded out a 43-36 win over Chilton County on Wednesday. 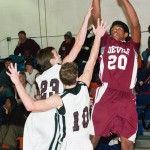 Fade away: Maplesville’s Anthony Johnson shoots over the defense of Thorsby’s Jace Maddox (23) and Andrew Farris during the Red Devils’ win Thursday.

The two teams that won Thursday were scheduled to play their first games of the tournament on Monday, but those games were postponed to Wednesday when Chilton County schools were canceled Monday because of winter weather.

So, the VHS girls and MHS boys were forced to play two days in a row.

Verbena looked tired early, trailing 21-10 at halftime to what could have been considered the tournament favorite, but used a different defensive look to hold Isabella to 12 second-half points.

“We tried to run something similar to what Jemison ran (in a win over Isabella on Jan. 4), but we couldn’t execute,” Shedd said.

So, the Mustangs utilized a “triangle-and-two” defense that packed the paint and limited the effectiveness of IHS post players Whitney Smith (who finished with seven points) and Amber Wyatt (six).

Shedd said VHS hadn’t practiced the defense until the day of the game.

“In the end, it came down to my kids making plays, both on offense and on defense,” he said.

Marqueska Deramus led all scorers with 21 points for VHS, and teammate Lacey Short had 13 points.

Verbena will play the winner of Friday’s Thorsby-Jemison game at 5 p.m. Saturday for the county championship.

The Red Devils used their height advantage in a zone defense to disrupt Thorsby’s offense—and a speed advantage in the open floor to score easy baskets.

MHS, the tournament host, led 12-8 after one period and increased the edge to 26-16 at halftime.

But Thorsby stayed within striking distance, actually outscoring the Devils, 14-13, in the second half.

Two players accounted for all but two of Verbena’s points as the Red Devils topped Chilton County’s girls, 43-36, on... read more