This week Anna Christine Davenport, the 2011 Chilton County Junior Miss winner, is preparing to compete in the Alabama Junior Miss program in Montgomery.”

Davenport, of Jemison, was honored with the local title in May, a year after her sister, Jana, won the same crown. 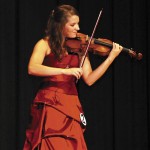 “Both of my girls have been blessed to represent Chilton County,” said Vanda Davenport, their mother. “It has been good to see them change and become aware of their whole person.”

Anna left for the state capital last Friday evening and is excited to be representing Chilton County, her mother said.

“The requirements and things she’s had to focus on required her to look at different aspects of her life,” said her mother. “She has worked really hard and has really focused on her physical fitness. This has changed her life.”

The program awards college scholarships to young women who have distinguished themselves at school and in their communities.

Davenport will be competing for more than $40,000 in cash scholarships, $2.5 million in college-granted scholarships and a chance to travel to Mobile for the national competition June 23-25.

This week leading up to the program,  Davenport will be rehearsing the five categories she will be judged on in the program including: physical fitness, self-expression, scholastics, interview and talent ­— when she will be playing the violin.

“She has been in beauty pageants before, but she is excited because scholastics is something she has been working on all of her life,” said Vanda Davenport. “It is based on more than her outward appearance, it is based on what she has achieved in her life.”

In addition to rehearsing, Davenport will also spend the week volunteering in the community.

Through this program experience, Davenport has made numerous new friends from all over the state.

“She is staying with a host family and Ashley Shorter representing Wilcox County,” said Vanda Davenport. “She met a couple of girls when she went to orientation in December and has kept in touch with them. ”

Fifty-four contestants will be divided into four groups, and Friday night while Davenport’s group performs their talents, the other groups will perform self-expression and fitness.

The finals will be held Saturday at 7 p.m., when five judges will select the first Distinguished Young Woman of Alabama.

Chilton County Relay For Life’s annual kickoff has been rescheduled for Thursday, Jan. 20. The kickoff, which was postponed due... read more