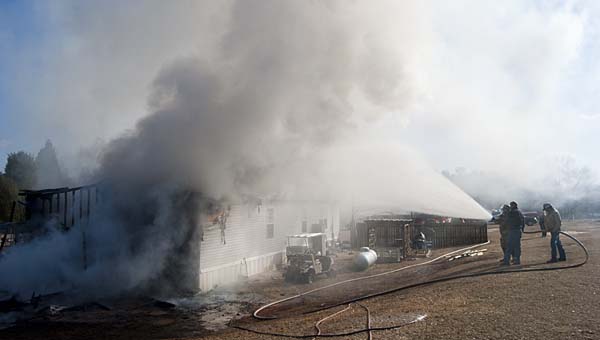 Fire fighters work to extinguish a fire Wednesday that destroyed a home near Thorsby.

A fire destroyed a mobile home Wednesday afternoon near Thorsby.

No one was at home at the time of the fire, according to friends of the homeowner.

Collins Chapel, Gap of the Mountain, Jemison and Thorsby fire and rescue departments all responded and worked to extinguish the fire for more than a hour. Crews stayed on the scene until approximately 6 p.m.

The exact cause of the fire is still under investigation, according to Jemison Fire Chief John Dennis. It appears the fire started in a shed just a few feet from the mobile home and quickly spread, engulfing both structures.

While no one was injured in the fire, a dog and litter of puppies were killed in the shed, according to firefighters and neighbors on the scene.

Though the exact cause of the fire is still under investigation, Dennis said departments see a spike this time of year due to the cold weather.

“This is typically the time (for house fires),” he said.

Dennis encouraged anyone using alternative heating sources to operate them under a watchful eye and keep plenty of space between the fire and anything combustible.

He said departments have seen a few fires caused by electronic chargers, like those used with laptops or cell phones, overheating.

By the end of January, Thorsby’s police patrol cars are expected to be equipped with the latest technology. The Thorsby... read more