Two players accounted for all but two of Verbena’s points as the Red Devils topped Chilton County’s girls, 43-36, on Wednesday in the first round of the Chilton County Basketball Tournament. 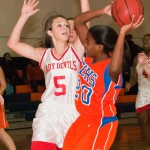 Lakeyn Edwards’ two buckets and Hope Driver’s one were the only other scores for the Devils.

Verbena built a 17-8 lead after the first period, but CCHS—playing on its home court though Maplesville is the tournament host—cut the deficit to 25-22 in the third period.

Deramus responded by blocking a shot with about 2:30 on the clock, collecting the loose ball, dribbling down the court and laying it in.

VHS led 33-26 after three periods, but Chilton was within five points in the fourth.

Renee Lewis led CCHS with 12 points, and Keona DeJarnett had 11.

Verbena plays Isabella at 6 p.m. on Thursday with a berth in the tournament finals on the line.

Shoot for two: Jemison’s Shayna Robinson, right, shoots over Maplesville’s Kiana Andrews on Tuesday in a game that began the... read more