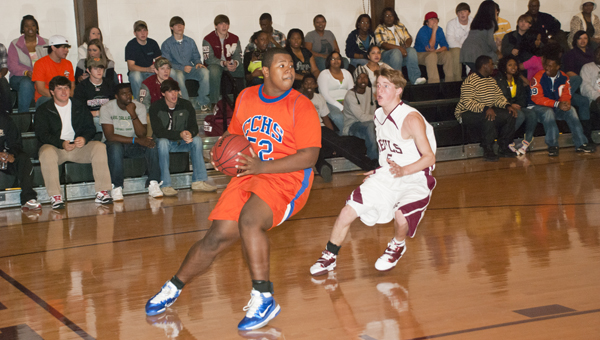 Nine is nice: Delondre DeJarnett, left, provides an inside presence for Chilton County High School, which is trying to win its ninth consecutive county tournament championship.

Young will face yet another hurdle this week as his team tries to extend an eight-year run of county basketball tournament championships.

“I know they’ve won a bunch in a row,” Young said but wasn’t sure exactly how many, probably because the tournament isn’t a hot topic around the program. “We’ve been more focused on doing better in our area games.”

The other five coaches involved with the tournament would probably say the same thing, but pride is a significant issue for players and fans when lining up against another squad from inside the county.

Two other coaches, like Young, are seeing their first county tournament: Scott Booth at Isabella and Ryan Powell at Thorsby.

But Young is the only one with the pressure of holding off a strong field of competitors wanting to get at CCHS’s throne.

Thorsby has been impressive under Powell, and Jemison may pose the most significant threat. The Panthers tend to score in bunches when their full-court pressure defense gains momentum.

Making matters easier is that the Tigers will enjoy a first-round bye. At 8 p.m. Friday, they’ll play the winner of Tuesday’s Verbena-Jemison contest.

Either way, the Maplesville-Isabella winner will play Thorsby at 7:30 p.m. on Thursday.

The tournament is hosted by Maplesville but is being played at CCHS, another advantage for Young’s team.

Young came to Chilton after three years, two as a head coach, at Stanhope-Elmore. Young is originally from Columbia, Pa., but attended the University of Alabama and stayed in the state.

“There’s always going to be a crossover period of trying to change things up,” he said. “You have your good moments, and you have your bad moments.”

A ninth consecutive county tournament title would be one of the team’s best moments under Young this season.