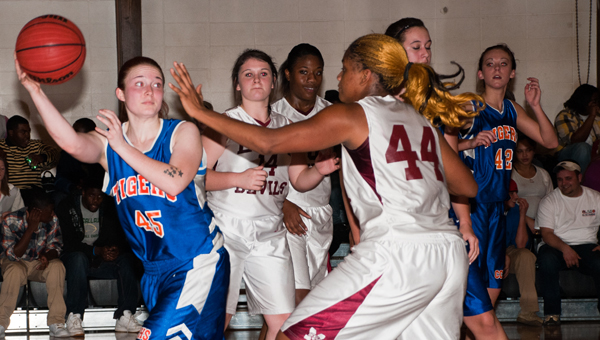 Hands up: Chilton County’s Audrey Gentry (45) tries to pass the basketball during Thursday’s game but finds Maplesville’s Ebony Childers in the way.

The host Red Devils, it turned out, wanted the victory a little more, overcoming a seven-point fourth-period deficit to win, 42-39, in overtime.

Ebony Childers scored the game winning basket with 33 seconds remaining in the extra period, rebounding a missed Maplesville shot and putting it back in for a 40-39 lead.

Keshia Bailey added two free throws with 2 seconds left to ice the victory, Maplesville’s first in its ninth game of the year.

Bailey’s free throw shooting was pivotal; she sunk two with 19 seconds remaining in regulation to tie the game at 34-all.

Chilton County plays Verbena at 3:30 p.m. Monday in the first round of the Chilton County Basketball Tournament. Maplesville plays Jemison at 6 p.m. on Tuesday.