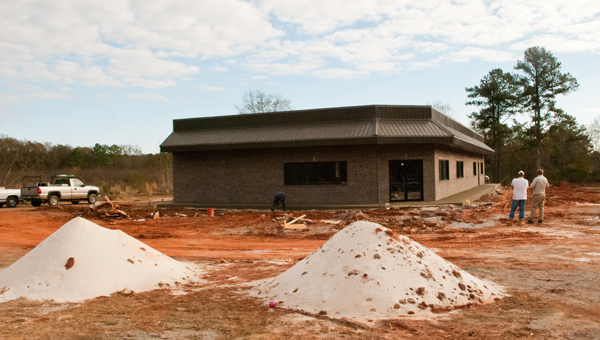 An under construction Exxon gas station is an example of the type of business Jemison Mayor Eddie Reed wants to continue to attract.

Though official numbers have not been released, Jemison Mayor Eddie Reed said he expects the 2010 Census to show the city has grown from 2,248 in 2000 to more than 3,000 residents.

Along with more people comes the need for investment in infrastructure, such as sewer upgrades and road improvements.

“These services cost,” Reed said as part of a conversation about what the city faces in the New Year. “There have been no increases in taxation since 2004—we’ve tried to absorb costs.”

Reed said he’s proud Jemison has been able to maintain a minimal tax burden on its residents and that he and the City Council have avoided layoffs of city workers and cuts in services.

“The downturn in the economy has been a consideration for everybody, and Jemison is no exception,” Reed said. “I thank God we are blessed with a council that helped us through it.”

Reed said a company that helps Jemison with its finances, AlaTax, disclosed that while many municipalities experienced a sales tax revenue decrease of 25-30 percent in fiscal year 2008, Jemison’s decrease was 2 percent.

“We watched our pennies and stopped buying where we didn’t need to buy,” Reed said.

But more revenue will be needed as the city continues to grow. Reed said he and the council will continue to encourage small businesses to open in Jemison. Several have either recently opened or plan to soon.

“Like all cities, we survive off sales tax,” Reed said. “We hope we attract small retailers—that’s good for every city. It says a lot that businesses have begun to look toward Jemison.”

New businesses are imperative for keeping sales tax money in the city, Reed said, but locations like Jemison must have stores and restaurants that can compete with what is offered in nearby shopping malls.