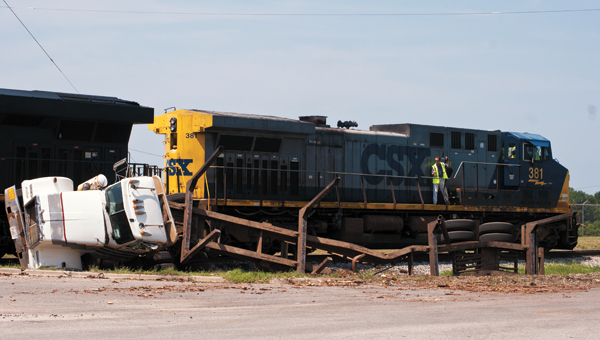 Big collision: A train and truck collided in Thorsby at the intersection of U.S. 31 and Chilton County 623, the site of at least one other train accident in 2010.

BOE adopts anti-bullying policy
The Chilton County Board of Education approved a new policy aimed at preventing bullying and other forms of harassment in the school system.
The policy, called the Chilton County Anti-Harassment Policy, was unanimously approved at a special called meeting of the board. State law required all school systems to have a similar policy in place by July 1.
The policy was added to the official student/parent information guide in fall 2010.

Chilton’s water named best tasting
A sample of drinking water taken from a limestone aquifer in northwest Chilton County was good enough to win the Alabama Rural Water Association’s 2010 Drinking Water Taste Test.
When asked what gave the water its pleasant taste, Chilton Water Authority Manager Doug Bice indicated that the key is in the limestone.
“It’s just a high quality, very clear water,” Bice told The Advertiser in a July 5 interview. “The limestone adds calcium to the water and brings the pH up.”

Davis, Hayden win party nominations
Incumbent Chilton County Sheriff Kevin Davis beat out John Shearon 4,083 votes to 3,815 to face Democratic opponent Terry Wilson in the fall. Also, Dave Hayden won the Republican nomination for Chilton County superintendent of education, defeating Tommy Glasscock 4,340 votes to 3,502 — not counting provisional ballots.
Hayden was elected as superintendent in the fall, and Davis was re-elected to his post as sheriff. Davis, who ran as a Democrat in 2006, ran as a Republican in 2010.

Summer temps reach dangerous levels
The National Weather Service in Calera issued a heat advisory beginning July 23, forecasting three-digit temperatures for the entire coverage area, including Chilton County.
The advisory stretched as far north as the Tennessee Valley and was set to remain in effect until 7 p.m.; however, NWS extended the advisory until Saturday.
Another advisory and an excessive heat warning were issued in August.

1-cent sales tax hearings planned
The Chilton County Commission announced plans to conduct weekly public hearings in different areas of the county to get public input on a proposed 1-cent sales tax increase.
The commission said it would take the public’s comments and questions into consideration and formally present a plan outlining how the tax revenue would be used. If the public’s response were favorable enough, the commission would request a countywide referendum for 2012 or possibly earlier.

Thieves target area businesses
A string of thefts in the Chilton County area left several store clerks with empty purses and missing wallets.
In most of the incidents, a pair of suspects entered the store pretending to be interested in making a purchase. While one distracted the clerk or store owner, the other took the person’s belongings.
Thefts occurred at Southern Belle Boutique in Clanton, Jemison Florist and another unnamed Clanton business.
Oletha Dansley, 46, of Mobile and Latonya Anderson, 40, of Birmingham were later charged in similar cases in four Alabama counties, including Chilton.

Train collides with log truck
A log truck and a CSX train collided in Thorsby the morning of Aug. 5, shutting down U.S. 31 for several hours.
The driver of the truck escaped without injury after jumping to safety from his stalled truck, and no one aboard the train was injured.
According to Thorsby Fire officials, the truck stalled on the tracks at the intersection of 31 and Chilton County Road 623. Upon seeing the approaching train, the driver jumped out of the truck before impact.

Chilton native named Ms. Agriculture
Allison Cobb of Jemison beat out several competitors from around the state for the title of Miss Alabama Agriculture.
The pageant, which was hosted by Chilton County and held at the CCHS auditorium, included nine contestants — all representing different counties.
Along with the title, Cobb won a $2,000 scholarship and a Viewer’s Choice award. She was sponsored by the Chilton County Farmers Federation.

Punches lead to murder
A Clanton man died Aug. 8 following a physical altercation the same morning in West End.
Keino S. Reed died after being struck with a chair and hitting his head on the sidewalk, according to officials.
An acquaintance of the victim, Terry Parker, was arrested and was being held in the Chilton County Jail without bond.

CPD works 20-plus counterfeit cases
If you encountered a counterfeit bill in the Clanton area in 2010, you weren’t alone. As of Aug. 10, Clanton Police were working about 25 different counterfeit money cases.
Police arrested a Verbena woman, Denise Courtney, 48, and seized about $1,000 in counterfeit bills thought to have been printed within Chilton County.
Counterfeit cases were reported not only in Clanton but also in Jemison and in rural areas of the county.

$500,000 of pot seized
Officials removed more than 3,600 marijuana plants from a wooded area in Verbena the morning of Aug. 11, the street value of which came to about $500,000.
The Chilton County Sheriff’s Office had received a tip about the plants the day before, and the plants were located about three miles off Chilton County Road 528, the nearest road. Narcotics officers camped near the site overnight, and an Alabama State Trooper helicopter, equipped with a cargo net, was used to remove the drugs.
Also involved in the case were officers from the Alabama Bureau of Investigation.

New Jemison school opens
A ribbon cutting ceremony was held Aug. 15 to commemorate the opening of the newly constructed Jemison Intermediate School.
It was announced that the facility would initially house Jemison Middle School as part of the transition.
The school, located not far behind Jemison Elementary, has a floor plan similar to that of Clanton Middle School.

Man charged in Peachtree robbery
A Montgomery man was charged Sept. 1 for the Aug. 27 robbery of Peachtree Bank’s Clanton branch.
Kenton Maurice Hall, 30, was caught after allegedly holding up Aliant Bank in Alexander City just three days after the Clanton crime. Police arrested him following a brief car chase and manhunt with tracking dogs and a state helicopter.

CNN films at Maplesville
Cable news giant CNN came to Maplesville School to tape a distance learning course for an education segment, which aired on the network on Sept. 3.
Filming also took place at one other Alabama school, Reeltown High School.
ACCESS Distance Learning was launched by Gov. Bob Riley in 2004, to allow schools, especially rural schools like Maplesville, the opportunity to offer more subjects through online courses and video conferencing.
“I thought it was a great opportunity to…showcase Maplesville and what is good going on within our system,” said Maplesville Principal Maggie Hicks.

County remembers O.J. McGriff
Chilton County said goodbye to one of its best-known names in education Sept. 11, O.J. McGriff.
McGriff, 87, of Verbena, served on the Chilton County Board of Education for 32 years and was also a World War II veteran.
“I followed in his shoes, and they were some mighty big shoes to fill,” said Ann Glasscock, McGriff’s successor as board chairman.

Proration increased to 9.5 percent
After passing what they thought to be a well-prepared budget, the Chilton County Board of Education was forced to dip into its reserve fund after Gov. Bob Riley increased proration statewide from 7.5 percent to 9.5 percent.
The cut meant that Alabama schools would receive $113 million less for the remainder of September 2010. Chilton County received about $800,000 less, and the difference had to come out of a $3.3 million reserve.

14-mile chase ends in wreck
A Montgomery woman led local officers on a 14-mile chase along Interstate 65 the night of Sept. 14.
About 10 p.m., Clanton Police received a call of a possibly stolen vehicle — a red Dodge Charger with Tennessee plates — that fled from Elmore County.
The driver sideswiped a patrol car and managed to avoid a roadblock at the 215-mile marker as well as a spike strip at the 217. But after the suspect tried to turn around in the median, she finally overturned at the 222-mile marker.
The driver, 50-year-old Lucrietia Yates Bishop, was transported to Shelby Baptist and was held on numerous charges.

Local defends black farmers in D.C.
Evangelist Robert Binion of Clanton continued his pursuit for answers in a discrimination case involving black farmers from Chilton County and other areas across the South.
On Sept. 20, a bus departed from the E.M. Henry Skills Center in Clanton for Washington, D.C., to protest what Binion and supporters believed were discriminatory practices by the U.S. Department of Agriculture. Binion, president of the National Black Farmers Association’s Southern Region, met with national leaders in defense of farmers who were denied loans.