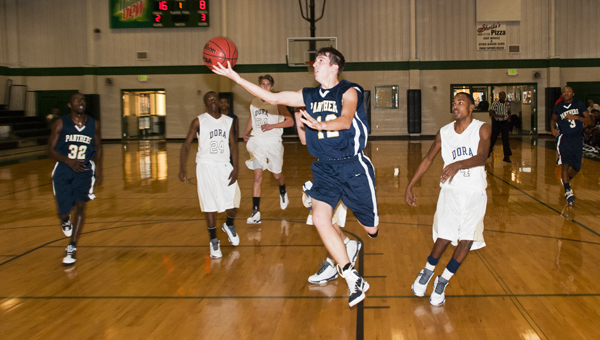 Flying forward: Jemison’s Zak Kaylor lays the ball in during a fastbreak on Wednesday against Dora in the championship game of the Holtville/Lake Jordan Jam tournament.

Jemison fought back from a 20-point halftime deficit on Wednesday to defeat Dora, 65-58, in the championship game of the Holtville/Lake Jordan Jam tournament.

Dora connected on seven 3-pointers in the first half and broke Jemison’s full-court pressure defense with ease, often scoring before all the Panthers were across half court.

But JHS coach Stacy McGehee said the most significant reason behind Dora’s 46-26 lead at intermission was that his boys team was being pushed around.

“At halftime, we went in and said, ‘They slapped us in the face the first half,’” McGehee said. “That’s the way we want to play, physical like that. We just had to answer.”

The Panthers (7-6, 1-2 area) cut the deficit to eight points with 2:42 remaining in the third period when Eddie Hubbard scored at the rim and then added the free throw because of a foul.

JHS took the lead when Javae Swindle stole the ball near Dora’s basket, was fouled and then made two free throws for a 59-58 edge with 1:23 left to play.

Jemison pulled away thanks to clutch free throw shooting, with Swindle and Trey Bryant making 6-of-6 attempts in the final 1:30.

Swindle scored six points in the last minute and a half. Bryant, who was named tournament Most Valuable Player, led all scorers with 21 points, including five 3-pointers.

The Panthers outscored ACA 20-9 in the third, and made nine free throws in 13 attempts in the fourth.

Mims scored 20 in that one.

Oct. 2: Jemison’s Kasi Wells, left, and Isabella’s Amber Wyatt were the two best players on the court as the... read more