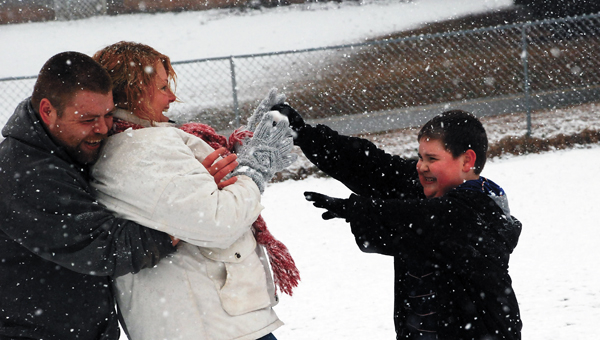 Jemison goes wet
In a special election afforded to towns with a population of 1,000 or more, Jemison residents voted 466-213 in favor of legalizing the sale of alcoholic beverages within the city.
In the landmark vote, Jemison was Chilton County’s second municipality — the first being Clanton — to become wet, allowing both cities to benefit from the revenue of alcohol sales in a dry county.
Jemison granted its first alcohol licenses March 1.

City loses data from lightning strike
City clerks in Jemison City Hall found themselves scrambling to recover about six months of computer data in January following a Christmas Eve lightning strike.
Mayor Eddie Reed said lightning struck a transformer in front of city hall, causing damage to the main computer system.
Also, the city’s backup system did not work properly, resulting in the loss of court records kept from June through December 2009.
Clerks worked around the clock to re-enter the information into the system.

Murphy given 35 years for murder
Jason Murphy was sentenced to 35 years in prison Jan. 25 for the 2003 shooting death of an Elmore County businessman.
Circuit Court Judge Sibley Reynolds handed down the sentence in Wetumpka, but the trial was held in Chilton County where in October 2009 a jury convicted Murphy of killing Ronnie Holman. Murphy had been charged with capital murder but was convicted on the lesser charge of felony murder.
Two previous cases had ended with hung juries.

Davis switches parties
Chilton County Sheriff Kevin Davis announced on Feb. 6 that he would be running for re-election as a Republican.
Davis, who was elected in 2006 as a Democrat, admitted that upon his election he had no family background in politics. He added that his decision to switch parties was based upon personal convictions.
“The Christian values that I have, I feel that they line up more with the Republican Party,” Davis said. “This decision is based on prayers and guidance from the Lord.”
Davis was re-elected as sheriff, beating out Democratic opponent Terry Wilson.

Snow returns to peach country
Friday, Feb. 12 was one of those rare days when snow actually stuck to the ground in Chilton County.
Flurries started falling in Clanton before 9 a.m. and began picking up and accumulating by about 10:30 that morning.

Reed named Citizen of Year
Jemison Mayor Eddie Reed was named The Clanton Advertiser’s 2010 Citizen of the Year by a committee of past award recipients.
Reed became Chilton County’s first black elected official in 1976 when elected to the Jemison City Council, serving six terms before becoming mayor in 2004. He was reelected as mayor in 2008.
Reed was also honored because of his years of dedication as an educator. He taught for more than 30 years at Jemison High School and Wallace Community College and served two terms on the Chilton County Board of Education.

Friends Diner burns in arson
Friends Diner in downtown Maplesville burned between 3 and 4 a.m. on Sunday, March 7 in what was later determined to be arson.
Officials found that the store’s cash register was missing, which suggested an attempt at disguising a burglary.
The restaurant was being remodeled at the time.

Cold causes major road damage
Rain and freezing temperatures caused about $600,000 in damage to Chilton County roads, according to assessments by the Federal Emergency Management Agency (FEMA).
Assessment teams identified more than 20 county roads that sustained damage from Jan. 1-15, it was reported in March. The National Weather Service also said the 15-day period was one of the coldest in the state’s history.

Cedar Grove recovers from collapse
Sunday, March 14 marked a new era for members of Cedar Grove Methodist-Protestant Church, who after nearly four years moved back in their newly rebuilt sanctuary.
The roof of the church collapsed on June 22, 2006, destroying much of the sanctuary and items within. An investigation by the State Fire Marshal’s Office followed, as the building had been designed and built by the pastor and congregation members. But no charges were filed.
Several churches and other groups from around the county donated money and furnishings to help the congregation get back on its feet, and on March 14 a dedication service was held.

Tornado damages Clanton homes
A tornado touched down March 25 at 7:59 p.m., damaging five Clanton homes but injuring no one, reported the National Weather Service.
Several large trees were blown down on Ware Avenue and along Littlejohn Road, near where the twister touched down.
The storm packed winds of 95 mph and dug a path of 2.76 miles long and 200 yards across at its widest point. It made its way east across Yellowleaf Road, destroying sheds and taking with it several pieces of playground equipment.
All the damage occurred within a timeframe of about six minutes.

Moore won’t seek reelection
On March 29, Keith Moore, then Chilton County Superintendent of Education, said he would not seek reelection.
Moore, a former administrator at Verbena School, was elected to his first term as a Republican in 2006.
“I’ve been in it (education) for 27 and a half years, and I’m just looking for something else to get into,” Moore said.
Republican David Hayden would later be elected to the post.