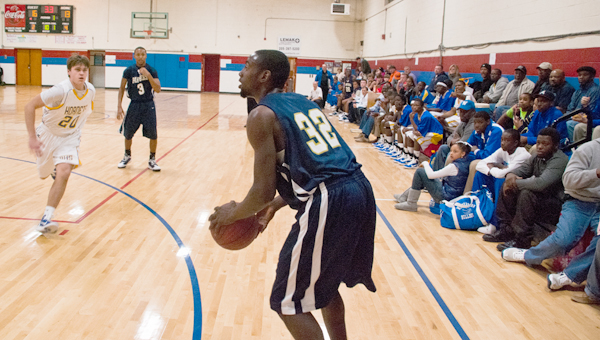 Open look: Jemison’s Eddie Hubbard, above, spots up for a 3-point shot during Monday’s game against Beauregard on the final day of the Verbena Christmas Tournament.

Jemison defeated Beauregard, 75-70, on Monday to end their appearance in the Verbena Christmas Tournament—and the first half of the 2010 season—with a win.

The Panthers (4-6, 1-2 area) will begin the second half of the season, after more than a week’s break for Christmas, by playing in the Holtville/Lake Jordan Jam on Dec. 27 and 29.

The rest should ensure JHS continue effectively playing its full-court pressure defense, which on Monday kept Beauregard off balance.

Two consecutive 3-pointers by senior Trey Bryant with about 3 minutes remaining in the first period gave Jemison a lead it would never relinquish.

Junior Javae Swindle stole the ball near his own 3-point arc, with about 7:20 on the clock in the second, and passed it ahead to junior Eddie Hubbard, who slammed it home for a 20-13 Jemison lead.

The Panthers led by as many as 14 points in the second period, and held a 38-25 halftime advantage after Ben Howard rebounded a missed shot and put it back in before the buzzer.

But Beauregard fought back in the second half, scoring 31 points in the fourth period and cutting the lead to four with seconds left to play.

“We’re not used to being on the finishing end of games,” McGehee said.
Bryant led Jemison with 18 points.