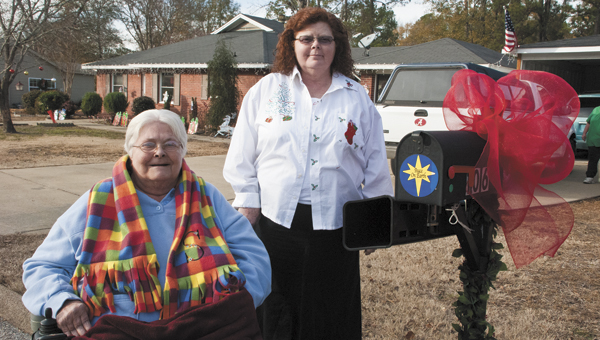 Neighbors Shavon Lindsey, left, and Rhonda Frederick have garnered attention for the red ribbons they have decorated along mailboxes on Hoyt Brownie Road.

Rhonda Frederick started the trend by making a ribbon for herself, and then her neighbor and friend, Shavon Lindsey, wanted one for her mailbox. After seeing Frederick’s and Lindsey’s mailbox décor, other neighbors on their street wanted a red ribbon to put on their boxes as well.

Rhonda Frederick first decorated her mailbox with a red ribbon — the bright ribbons now adorn every mailbox along her street in Clanton.

“Our neighbor across the street, Pearl Bice, asked where she could get one and went to the stores looking to buy one,” said Frederick. “What she didn’t know is that I made them so Lindsey and I got an idea to make one for her and snuck it on her mailbox as a surprise. She was very thankful and pleased.”

After making the ribbon for Bice, they decided to put ribbons on all of the neighbor’s mailboxes.

“I didn’t want to impose on anybody,” said Frederick. “We did it because we care and because we love Christmas. We wanted to do something not to be seen for us, but as a whole.”

“Red Ribbon Boulevard” is creating a buzz in the community.

“I was outside putting up lights, and a police officer drove up and I asked him wasn’t it pretty, referring to my lights,” said Dianna Velez, Lindsey’s niece. “The officer said yes, but he had to come by to see what ‘Red Ribbon Boulevard’ was all about.”

“When I went to drop a letter off at the post office, one of the ladies said she is bringing her children to see the street,” said Velez. “She said she heard it was one of the prettiest streets in Clanton.”

Approximately 12 ribbons were made to decorate each resident’s mailbox.

“We wanted to put a smile on our neighbors’ faces and in their hearts,” said Lindsey. “We are a very close community, and I hope the red ribbons become a tradition.”

Open look: Jemison’s Eddie Hubbard, above, spots up for a 3-point shot during Monday’s game against Beauregard on the final... read more