Debbie Jones was given the top honor by the Rotary Club of Chilton County to conclude a meeting Wednesday that also included the club giving $4,500 to charities.

Jones, the club treasurer, was named Rotarian of the Year after secret voting by club members.

“She helps a lot of people, and we’re happy to be able to give this to her,” said club secretary Judy Benson, who announced the award recipient at the meeting at Grande Ol Café. 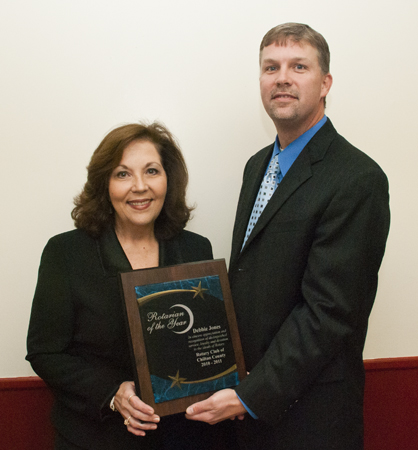 Rotary Club of Chilton County President Russ Hamlin, right, presents Debbie Jones with a plaque after she was named Rotarian of the Year at the club's Wednesday meeting.

Jones works at Peoples Southern Bank and was perhaps tipped off about the surprise when numerous co-workers arrived for the meeting.

“I was a little shocked when all of my second family started showing up,” she said. “Rotary does a lot of things that are near and dear to our hearts and my heart. This really means a lot to me.”

Jones has been a Rotary member for three years.

The meeting was attended by Rotary International District Governor Joe Saloom, who congratulated the club on its donations and on packing in for the meeting more than three times the usual attendance.

“This club is doing great,” Saloom said. “What you’re doing today is building this community.”

Rotary presented donations of $1,500 to CareNet Pregnancy Resource Center; $1,500 to Joe Lee Griffin Hope Lodge, which is located in Birmingham but serves many Chilton County natives; $500 to Through the Grace of God Ministries; $500 to the Chilton County Toys for Tots Program; and $500 to Child Protect Children’s Advocacy Center .