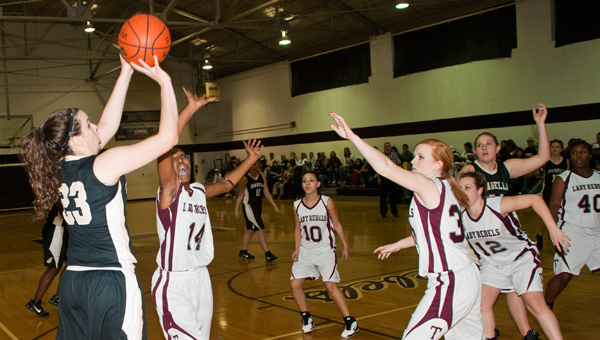 Isabella connected on 19 of 21 free throw attempts—including many late in the game after Thorsby’s best player this night had fouled out—and took a 45-41 win at Thorsby.

The contest may have been between the two best girls basketball teams in Chilton County. Thorsby won last year’s county tournament, and Isabella showed how much improvement it has made in coach Jared Day’s first season, improving to 7-1 overall and 1-1 in area play on the year.

Visiting Isabella led for most of Tuesday’s game, but every time the Mustangs seemed on the verge of pulling away, Thorsby senior Amanda Hubbard would drain a crucial 3-pointer, giving her team new life.

Hubbard (17 points) and Sharonda Cooper (10), a junior, combined to score most of Thorsby’s points, but Hubbard fouled out with several minutes left to play and Isabella’s stifling defense won the game.

With Hubbard out, IHS shifted to a Box-and-1 defense, with Chasity Williams jumping into passing lanes and not allowing Thorsby to get the basketball inside the 3-point arc.

“She was the difference in the game,” Day said about his sophomore guard.
Much like Cooper and Hubbard dominated Thorsby’s scoring, Isabella’s Smith (14 points) and Amber Wyatt (15) accounted for most of their team’s points.

Still, the game was tied with as little as 4:23 remaining in the fourth period, and the hosts (4-3, 1-2) took possession of the ball with a chance to tie the game, down by three points, with 26 seconds remaining.