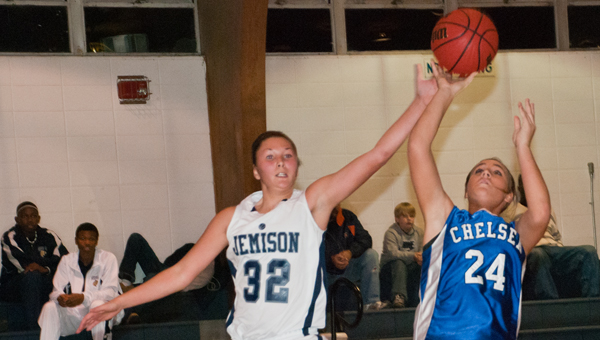 Jemison went scoreless over the last 2 minutes of a game against Chelsea on Saturday and lost, 47-42.

The Panthers held a 42-40 lead late in the game, but “then we just couldn’t hit a shot after that,” Coach Stacy McGehee said.

On Friday, Jemison had defeated Bibb County for the first time in more than 20 years in an emotional game that saw Bibb come back from a large deficit, but JHS held on.

The Panthers may have had a difficult time bouncing back and winning another close game only one night later.

Trey Bryant and Eddie Hubbard, both juniors, scored 12 points each in the game for JHS.
Bryant also recorded eight rebounds and four assists, and Hubbard had nine rebounds.

Jemison’s girls team, meanwhile, fell to Chelsea (3-5) by a 50-25 score as it played without two regular contributors–senior Kortney Robinson and junior Shayna Robinson–and a third player, sophomore Shelby Griffin, who has yet to see action but figures to be a crucial component when she returns, which should be after the Christmas break.

“They had a couple of girls inside that we didn’t have an answer for,” McGehee said.
Chelsea had a 5-0 lead before Jemison (3-4, 1-1) scored, on a fastbreak that ended with senior Kelsey Mims laying the ball in despite being fouled.

She added the free throw, but 5-3 was as close as the Panthers would get the rest of the game.

The visitors’ press caused numerous Jemison turnovers, allowing the Hornets to lead 36-19 at halftime and 40-25 after three periods of play.

Jemison’s boys and girls teams plays its third area game of the season when it hosts Southside-Selma on Tuesday beginning at 5 p.m.

Jemison’s boys basketball team on Friday defeated Bibb County for the first time in at least 20 years. It was... read more